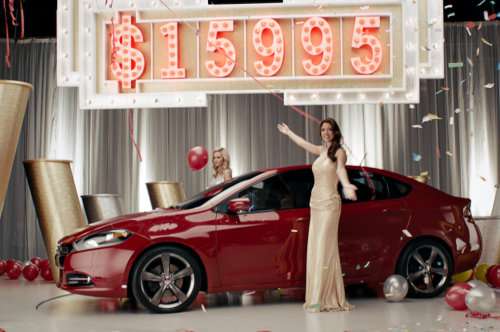 The Chrysler Group expects great things from the 2013 Dodge Dart when it hits showrooms at full steam later this month and to support the ongoing product launch – the company has published the first television ad for the new Dart with the small-screen debut expect to come during Tuesday night’s Major League Baseball All Star Game on Fox.
Advertisement

This fast paced 90 second television advertisement for the 2013 Dodge Dart is titled “How to Change Cars Forever” and it features the new brand tagline “New Rules”. This video blasts through the lengthy process of designing a new vehicle from the original concept drawings to the clay designs, from auto shows to race car debuts. Along the way, we get a look at the Dart in the earliest drawings and as the video moves forward, we see the Dart in production form including a look at Travis Pastrana’s #199 Red Bull Racing Dodge Dart rally car.

The new Dart commercial is packed full of action with a chance to see an unknown car hit the ground (“destroy the design”, 12 seconds in), a group of astronauts, a Reliant Robin rolling over, a whole lot of coffee consumption, Tom Brady as the “perfect” celebrity spokesperson and a look at a variety of the new Dart sedan’s innovative features including the smart phone app and the gorgeous dash design. The new ad also points out that the Dart gets an impressive 41 miles per gallon and the starting price is just $15,995. The background music is “No Church in the Wild” performed by superstar hip hop duo Jay-Z and Kanye West.

“Adding a dose of fun, creative license and Dodge brand humor, ‘How to Change Cars Forever’ captures the meticulous process of starting with a simple idea and developing it into a revolutionary new car, including the angst and pressure of a blank page, trials and errors of the early stages, and molding, shaping and testing the Dodge Dart until it was right,” said Olivier Francois, Lead Executive for Marketing, Chrysler Group LLC. “We wanted to provide a peek inside what it takes to bring a new car to fruition.”

This 90 second commercial spot for the 2013 Dodge Dart for airing during the 2012 MLB All Star Game will be followed by 30 and 60 second commercials on television and in movie theaters around the country. This advertising launch correlates with the introduction of the very first Dart units in dealerships around the country. A broad advertising campaign will arrive in September and that will including more television, print and mass media advertisements showing off the sporty new compact sedan.

Check out the first television ad for the 2013 Dodge Dart below courtesy of the Chrysler Group.