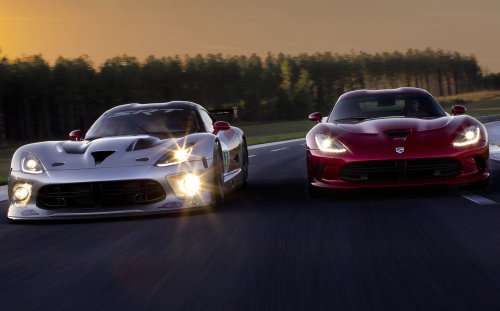 When the 2013 SRT Viper debuted last Wednesday, SRT CEO/President Ralph Gilles discussed the basic specifications of the new American supercar but to get into the real nitty-gritty of the new Viper, the Chrysler Group has put together a series of short videos walking us through pretty much every aspect of the 2013 Viper.
Advertisement

The collection of 2013 SRT Viper videos begin with a short piece showing the highlights of the actual debut of the new Viper in New York. It begins with Ralph Gilles talking about the car a bit before the 2013 Viper GTS rolled onto the stage and as the video progresses; Gilles is joined on stage by the 2013 Viper GTS-R driven by Kuno Wittmer.

The second and third videos walk us through the interior and exterior design processes and goals behind the 2013 SRT Viper. The exterior video explains how the design came to be and how every aspect of the 2013 SRT Viper exterior is as functional as it is aesthetic. The exterior video also goes into detail about the new high tech headlights and taillights towards the end – offering a close look at just how the new exterior lights function. The interior video features a trio of Viper designers who offer an in-depth at the ins and outs of a much more luxurious interior that still preserves the race ready nature of the 2013 Viper.

Once the design was out of the way, Chrysler turned their video cameras to the men in charge of the 640 horsepower engine and the handling capabilities of the 2013 SRT Viper. The powertrain video (the 4th video below) explains the changes made and not made to the 2013 Viper’s 8.4L V10, going so far as to point out what changes added power (such as the new exhaust system that added 7 or 8hp). The handling characteristics video (video #5) walks us through the changes made to the 2013 Viper to offer improved handling capabilities without killing the fun of the Viper. Of course, this includes a detailed look at the new stability and traction control systems along with how they are displayed on the sexy new Viper gauge cluster.

The 6th video below has 2013 SRT Viper Chief Engineer Graham Henckel talking about the inspiration behind the new Viper, including those features that were assisted by looking at the Viper’s new cousins from Ferrari, Fiat, Maserati and Alfa Romeo. Henckel goes into detail about weight saving efforts through the use of new carbon fiber body panels and more high strength steel in the chassis construction. Overall, Henckel touches on all of the most exciting features of the 2013 Viper that will set it apart from the older Vipers – and other supercars around the world.

Last, and most certainly not least, is a video showing the new 2013 SRT Viper GTS-R race car in the wind tunnel. For those of you who haven’t seen a wind tunnel test before, this short clip offers a great look at how the air flows over the new race-built Viper. We can see how the smoke tucks against the car as it passes over the greenhouse and then down under the large rear spoiler. This is the force at action when the GTS-R is tearing around the racetrack at 150+ miles per hour – helping to keep the supercar pinned to the ground.

So, grab a drink and a snack, turn down the lights and prepare to enjoy 27 minutes and 44 seconds of detailed information in the 2013 SRT Viper and Viper GTS-R videos attached below. Unfortunately, there are no new videos of the 2013 Viper in action but with the debut of the car out of the way – it is only a matter of time before Chrysler and the SRT Group start rolling out more videos of the Viper showing off how awesome it is in the real world.

Tesla Giga Berlin's New Hurdle: It's Not Only the Gov't, but Now Tesla Itself
Teslas Are Sold Out Until 2023, But The Timing May Reverse
END_OF_DOCUMENT_TOKEN_TO_BE_REPLACED