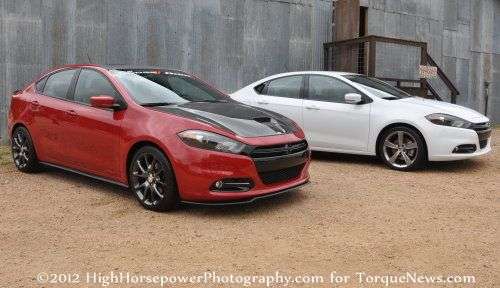 The Chrysler Group has continued to see things improve with the popular lineup of new models as they led the American auto industry in year over year growth in April 2012 - in a month where there were 3 less selling days than in April 2011.
Advertisement

The five brands of the Chrysler Group posted an overall improvement of 20% in April 2012 compared to April 2011; made more impressive by the fact that there were only 24 days to sell vehicles last month as opposed to the same month in 2011 when the dealerships had 27 days to move new units. The Chrysler Group sent out 141,165 new cars, trucks, SUVs and vans in April 2012 for an average of 5,882 vehicles per day where the 117,225 vehicles sold in April 2011 accounts for an average of just 4,342 vehicles sold per day last year. An increase of over 1,500 vehicles sold PER DAY (36% better than last April) shows a clear improvement in the vehicles offered – especially when considering the fact that Chrysler’s gains in overall growth and daily sales growth were the tops in the American industry.

The top brand in terms of growth from the Chrysler Group was the diminutive Fiat brand, which used the Fiat 500 and 500C to send out 3,849 new vehicles – an increase of 336%. The Fiat 500 is rolling ahead well this year with 12,699 units sold through the first four months, which represents an improvement of 819% compared to where the Fiat brand was at this point last year. Things should continue to improve with the launch of the Fiat 500 Abarth along with the electric versions later this year.

The second best brand in terms of growth was Chrysler, with a jump of 56% in sales for April 2012 compared to the year before. When looking at daily sales, the Chrysler brand sold 1,328 units per day last month while selling just 755 units per day in April 2011 – an increase of 76%. All three of the existing Chrysler brand vehicles saw a positive growth last month with the top model being the Chrysler 300 sedan, which jumped up 138% in the fourth month of 2012. The compact Chrysler 200 sedan and convertible were second in growth with an improvement of 61% while the Town & Country minivan family was third with a 22% increase. The Chrysler 200 led in sales volume with 13,343 sold followed by the Town & Country with 10,773 minivans sold and the Chrysler 300 was “last” with 7,763 luxury sedans sold last month.

Jeep was next in line in terms of growth with 38,684 sport utility vehicles sold accounting for an improvement of 19% compared to the longer selling month one year ago. When looking at the daily sales rates, the Jeep brand improved by 34% - selling 1,612 units per day in April 2012 compared to just 1,199 SUVs a day sold in April 2011. Jeep was led in monthly growth by Wrangler which increased by 35%, followed by the Grand Cherokee with a 21% improvement and the Liberty; which improved by 19% for the month. The Wrangler also narrowly led the brand in sales with 12,184 units sold while the Grand Cherokee was a close second with 11,834 units sold and the Liberty was third with 5,789 units sold.

The Ram Truck brand was next in growth with a year over year increase of 12% with 21,505 trucks and work-ready minivans sold last month. More importantly, the Ram brand sold 896 vehicles a day last month while the brand sold just 713 units a month in the same month in 2011. As is almost always the case, the Ram Truck brand was led in both growth and sales by the Ram pickup, which moved 21,126 trucks last month for an increase of 19%. The Grand Caravan-based Ram Cargo Van (C/V) moved 340 units last month, making it the second bestselling model in the brand ahead of the Dakota (which moved just 39 units months after production ended).

The Dodge brand was the “worst” brand from the Chrysler Group in terms of growth but with 45,248 vehicles sold last month – Dodge was the bestselling brand from Chrysler and the 8th strongest automaker in terms of sales in the US. That sales figure accounted for a jump of just 2% compared to April last year but with over 240 more vehicles sold per day by Dodge, the company saw their daily sales rate increase by 15%. Dodge was led in growth by the Avenger with a 47% increase while the Journey was second with a 29% improvement and the Grand Caravan rounded out the top three with 27% more vehicles sold last month. In terms of sales, the Grand Caravan barely edged ahead of the Avenger with the minivan moving 11,183 units compared to 11,147 midsized sedans sold during the same period. The Dodge Charger rounded out the top three in sales volume with 7,991 new muscular sedans sold last month.

The biggest news for the Chrysler Group will be the debut of the new 2013 Dodge Dart (shown above on the right) later this summer – an event which will surely help the smallest of the Big 3 continue to lead the industry in year over year growth.

Toyota's First EV Will Have a Name of BZ: Toyota BZ
First Videos From Inside The Boring Company's Las Vegas Loop
END_OF_DOCUMENT_TOKEN_TO_BE_REPLACED