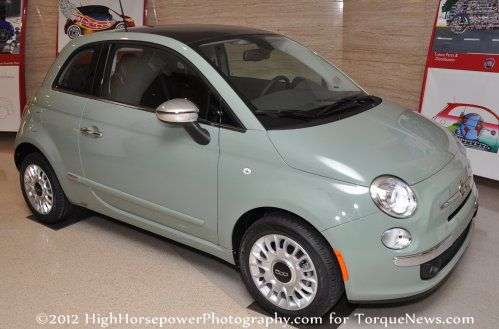 The Chrysler Group continues to power forward in May 2012

The Chrysler Group continued their incredible growth in May 2012 – once again standing as one of the strongest automakers in the US in terms of growth compared to the same month one year ago.
Advertisement

In May 2012, the Chrysler Group posted a year over year growth of 30%. This made them the third best company in the American auto industry in terms of growth rate and with 155,041 vehicles sold; the five brands of Chrysler combined for the fourth best total in the US in terms of sales volume. Chrysler was bested in growth only be Toyota and Honda who both saw massive gains compared to May 2011 but that wasn’t due to a spike in sales this year but instead, the two Japanese automakers had normal months this year after being pummeled by the natural disasters in Japan last spring.
Among automakers not directly hit by the earthquake and tsunami of 2011, the Chrysler Group was the strongest auto company in the US once again for May. This marks Chrysler’s 26th consecutive month where the group has shown year over year gains – that is over two straight years where Chrysler has posted an improvement compared to the same month a year prior.

The Fiat brand posted its fourth consecutive monthly sales record with an impressive 4,003 examples of the company Fiat 500 sold last month. This is the most vehicles Fiat has sold in the US since being re-introduced to the US, bringing about a 128% gain compared to the numbers from May 2011. On the year, Fiat has sold 432% more vehicles in 2012 than they did in the first five months of 2011 and with the introduction of the 500 Abarth and the upcoming electric 500, Fiat could see things continue to boom. With 128% improvement, Fiat was the top automotive brand in the US in terms of growth – besting even Toyota as the Japanese automaker bounced back from the rough spring of 2011.

Chrysler was second in terms of year over year growth as sales continue to soar for the three remaining Chrysler brand vehicles with an increase of 81%. The Chrysler Town & Country minivan was the worst vehicle from the Chrysler brand in terms of growth with an improvement of 56% in moving 10,323 units. You know that a brand had a good month when the worst performing model improved by 56%. The Chrysler 300 was the top model in terms of growth with 6,101 luxury sedans sold accounting for a 140% improvement over last May and the Chrysler 200 midsized sedan led the brand in sales volume with13,250 vehicles sold – giving the sporty sedan an 87% increase over last year. On the year, Chrysler has moved 140,891 vehicles, an improvement of 77% even though the luxury brand has only three vehicles right now.

Jeep was next in line in terms of sales growth with 44,198 SUVs sold accounting for a 24% year over year improvement. The tried and true Jeep Wrangler was the top model in terms of both sales volume and sales growth, with 14,454 units sold accounting for a gain of 44% compared to May 2011. The range-topping Jeep Grand Cherokee was second in both sales and growth with 13,274 SUVs sold bringing about a 40% increase in May 2012 and the Jeep Liberty was third in sales and growth with 6,859 units and 13%. For the first five months of 2012, Jeep has sold 197,028 vehicles, giving the trail rated brand an improvement of 29% compared to the same period last year.

Even though the Chrysler Group’s Ram Truck brand only has two vehicles in the current lineup, the Ram brand posted an improvement of 23% in May 2012. The success of the Ram brand continues to rely completely on the Ram truck family, which moved 26,040 units for a growth of 29%. The Ram brand also sent out 307 examples of their Dodge Grand Caravan-based Ram C/V. The Ram brand also sold 26 examples of the long-gone from production Dakota, which was the major negative impact on the overall growth of the truck brand. On the year, Ram has sold 117,373 vehicles – a 20% improvement over the first five months of 2011 – with the majority of those vehicles (114,630) being full size Ram pickups.

The Dodge brand was the Chrysler Group’s worst performing brand in terms of growth with an improvement of “only” 14% in May 2012 compared to May 2011 but with 45,793 vehicles sold last month; Dodge was the top brand in terms of sales. With 10,682 vehicles sold bringing about a 93% increase, the Dodge Avenger was the top model in terms of growth followed by the Dodge Journey (56%) and the Dodge Challenger (41%). The Dodge Grand Caravan was the top model in terms of sales volume with 12,418 minivans sold, followed by the aforementioned Dodge Avenger and the Dodge Charger (6,735 units sold). For the year, Dodge has improved by 16% while moving 217,263 vehicles and with the introduction of the 2013 Dodge Dart right around the corner – we should expect to see a huge boom in Dodge sales through the summer as people line up for the awesome new compact sedan.