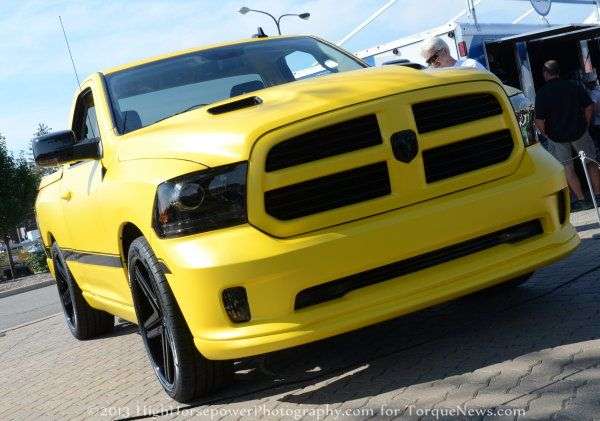 A recent report indicates that the Chrysler Group is considering a production version of the Ram 1500 Rumble Bee Concept after a ton of positive reaction from show goers at the 2013 Woodward Dream Cruise – with only the company dealer networks seemingly standing between the cool yellow concept and a production reality for sport truck lovers.
Advertisement

After an automaker debuts a concept vehicle like the Ram 1500 Rumble Bee at a public event like the Woodward Dream Cruise, with a positive reception, the next step is speaking with the people who will be tasked with selling these trucks. Chrysler has reportedly begun talking to dealerships to gauge their reaction and gather ideas on whether or not the Rumble Bee Ram 1500 seems like something that they could sell. Provided that dealerships like the idea of the Rumble Bee Concept and believe that a production model would sell, the company then will have to look at what aspects of the concept can feasibly be implemented on a production vehicle.

The Ram 1500 Rumble Bee Concept that debuted last month at the 2013 Woodward Dream Cruise was based on the rear wheel drive Ram 1500 R/T production model with a short bed/regular cab configuration. Mopar then added a body kit, 24 inch wheels wrapped in high performance tires, the power budge hood and a hard tonneau cover followed by the striking matte Drone Yellow paint with lots of black accents. To improve the performance of the Rumble Bee Concept, Mopar equipped with bright yellow pickup with a sport suspension setup to improve both the look and the handling while a dual mode exhaust system and a cold air intake allow the 395 horsepower, 5.7L Hemi to breathe a little easier. On the inside, the Ram 1500 Rumble Bee Concept features Rumble Bee logos here and there, unique seating surfaces, a shift knob with a real bee lodged in the face over a honeycomb background and the “rumble button” to control the dual mode exhaust system. Click here for a closer look at the Ram 1500 Rumble Bee Concept at the Woodward Dream Cruise.

The short of that all is that the Ram 1500 Rumble Bee Concept has very few components that couldn’t realistically be offered on a production vehicle. The Mopar body kit, hood, tonneau cover and wheels are all easy enough to do as they are already offered via the Mopar aftermarket catalog. The same is true of the Mopar cold air intake and for the dual mode exhaust system, similar systems have been used in other models so it should just be a matter of adapting the system for push-button control in the Rumble Bee in a manner that makes it cost effective for production. Honestly, the only feature of the exterior that isnt likely to see production is the matte Drone Yellow paint as these new matte paint options are more expensive and they require far more upkeep so we should expect that a production version of this truck would use a gloss yellow similar to what is used on the Dodge Challenger Yellow Jacket. On the inside, things like the unique seats and the Rumble Bee badging shouldn’t be any problem but the production model likely won’t offer a real bee frozen in the plastic of the shift knob – instead the company will likely use a painted logo set in the knob.

While the matte Drone Yellow paint scheme of the Ram 1500 Rumble Bee Concept looked great at the Woodward Dream Cruise and the bee inlay was pretty neat – we can expect that of everything in the package, these features would be the first to not make it into production. However, the substitution of gloss yellow paint rather than matte yellow paint and a printed bee logo on the shift knob rather than a real bee frozen in plastic take very little away from the coolness factor of this brawny Mopar performance pickup.

The Dodge Ram 1500 Rumble Bee had no problem selling back in 2003 so there should be no reason why dealers wont happily give the thumbs up to a new sport truck to bring addition foot traffic into their showrooms.