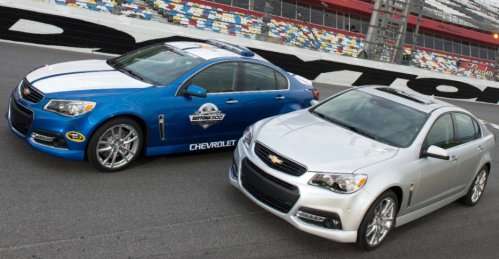 The Chevrolet SS performance sedan will not be sold in Canada

While the company has not issued a formal statement, Canadian news site The Globe and Mail has reported that the new Chevrolet SS performance sedan will not be sold in Canada.
Advertisement

General Motors has not offered an explanation as to why the 2014 Chevrolet SS performance sedan will not be available to Canadian dealerships but considering the amount of enthusiasm for the Chevrolet Camaro – we are led to believe that there are prospective buyers in Canada who will be disappointed by this news. Considering that the SS is Chevy’s first rear wheel drive performance sedan sold in the US in some 17 years while also being offered under other brand names in Europe and Australia – our neighbors to the north will not be able to grab up the brawny rear drive sport sedan.

The 2014 Chevrolet SS performance sedan is closely based on the Holden VF Commodore with a drivetrain that is similar to the one found in the current 2013 Chevrolet Corvette. The SS is powered by the LS3 V8, delivering 415 horsepower and 415lb-ft of torque to the rear wheels via a 6-speed automatic transmission. This drivetrain packs enough oomph to help the full sized sedan rip from a stop to 60 miles per hour in the low 5 second range – making it one of the quicker full sized sedans available in the US. On top of those impressive acceleration and power figures, the sport tuned chassis with a 50/50 weight distribution, the MacPherson strut front and multilink independent rear suspension and the massive Brembo brake setup help to make the SS a sedan that will handle like a proper sports car.

While the Chevrolet SS by name is not a global vehicle, it is very close to being a global offering thanks to the other models around the world that share the chassis and general exterior design. With that global application combined with the interest in Chevrolet performance models in Canada, it comes as a big surprise that GM plans not to offer it in Canada. Also, with the Chevrolet SS taking direct aim at the Dodge Charger which is bolt built and sold in Ontario, we would think that General Motors would want to compete with the big Hemi powered Mopar sedan in as many markets as possible.

General Motors is so happy with the Chevrolet SS before it has even gone on sale that the company chose to feature the SS as their NASCAR Sprint Cup car for the 2013 racing season. It was a Chevrolet SS race car that the lovely Miss Danica Patrick was driving this past weekend when she became the first woman to ever claim the pole position for the Daytona 500.

For American buyers, the 2014 Chevrolet SS performance sedan is expected to hit showrooms in the fourth quarter of 2013. The good news for Canadian buyers is that the 2014 Chevrolet Corvette Stingray will be available in their home market with the C7 Stingray making its public debut last week – receiving a similar amount of interest to what the new Vette received at its global debt in Detroit.

It will be interesting to see what kind of backlash General Motors has to face provided that they do not offer the Chevrolet SS performance sedan for the Canadian market. The General has already received some nasty bad press for their announcement that production of the Chevrolet Camaro would be moved from Canada to Michigan. This announcement quickly spurred an angry response from the Canadian Auto Workers Union, obviously coming as a shock considering that the bowtie clad muscle car has been built in Canada sine 1993.

Source: The Globe and Mail