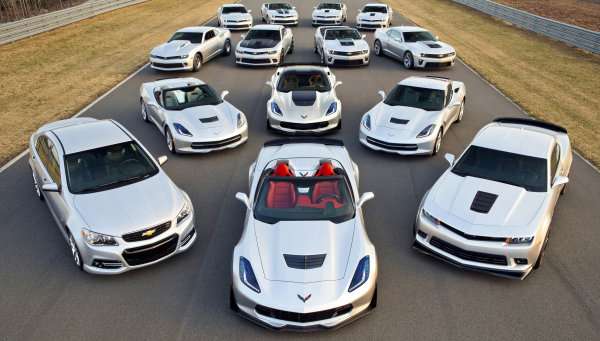 Chevrolet Offers More Performance Than Any Brand with Camaro, Corvette and SS

Now that General Motors has offered up the new 2015 Chevrolet Corvette Z06 Convertible at the 2014 New York International Auto Show, the biggest of the American automakers now offers 14 different performance vehicles under the Camaro, Corvette or SS performance sedan nameplates – more performance cars than any other automaker doing business in the US.
Advertisement

While some Ford and Mopar fans might dispute that the list of 14 vehicles is really just three vehicles with 14 different trimlines, no other automaker can challenge this list no matter how you paint the picture. The closest would be the Dodge brand, which has the V6 Charger, the Charger R/T, the SRT Charger, the V6 Challenger, the Challenger R/T, the Challenger Scat Pack, the Challenger Drag Pak and – eventually – the new SRT Challenger with the Hellcat Hemi. Dodge doesn’t offer any convertibles and the Viper is now an SRT product…which also doesn’t currently have a convertible so the best that Dodge can do (even when including the Viper) is 9 performance models once the Hellcat Hemi Challenger arrives.

The best that Ford Motor Company can do is Taurus SHO, V6 Mustang Fastback, V6 Mustang Convertible, Mustang GT Fastback, Mustang GT Convertible, Shelby GT500 (or the upcoming GT350) in both coupe and convertible form, the Focus ST and the Fiesta ST for a total of nine models although two are front wheel drive hatchbacks…which GM does not include in their list of 14 performance cars.

“Chevrolet has been America’s best-selling performance brand for four consecutive years, due in part to the breadth of our lineup,” said Mark Reuss, executive vice president, Global Product Development. “For 2015, we will have the best range in our history, offering a performance car for virtually every enthusiast, from the 30-mpg Camaro LS and the COPO Camaro drag car to the 625-horsepower Corvette Z06 Convertible supercar.”

While the new offerings from the Ford and Dodge lineup will help those automakers more closely challenge the impressive list of 14 performance cars offered by the Chevy brand – the current American performance car market continues to be dominated by the guys racing behind Bowties. Oh, and they are all available in silver.