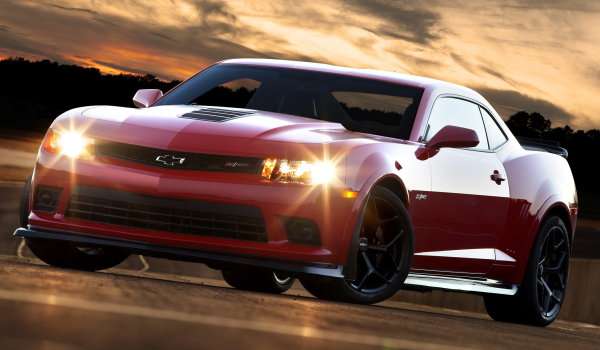 Chevrolet Might Not Bother with a Camaro to Challenge the Hellcat

Since the news hit that the 2015 Dodge Challenger SRT Hellcat would pack 707 horsepower and 650lb-ft of torque, the discussion over how the Chevrolet Camaro would battle back has been a hot topic but with the success of the Corvette Stingray and the breathtaking performance of the upcoming Z06 – maybe GM won’t bother building a Hellcat-killing Camaro after all.
Advertisement

The current horsepower war is all about how has the most power and whose performance models can go the fastest, so with the 6th generation Chevrolet Camaro coming within the next year or so, it is all but guaranteed that the new LT1 will power the 2016 Camaro SS. It was expected early on that we would also see a new Camaro ZL1 – likely packing the same 650hp LT4 as the 2015 Corvette Z06 – which would give that new Camaro the bragging rights of being the most powerful. At that time, we expected that the Hellcat would have less than the 640 horsepower offered by the SRT Viper, but the news that the Challenger SRT Hellcat packs 707 horsepower; the LT4 engine won’t be enough for the Camaro to surpass the Hellcat.

This will force General Motors to come up with a new engine for the 6th generation Chevrolet Camaro – or maybe GM won’t worry about the Hellcat. Maybe GM will let the lightweight Corvette Z06 take down the Challenger Hellcat with less power while the Camaro focuses on continuing to lead the muscle car segment in sales.

Why Not Chase the Hellcat with the Camaro?
The problem with General Motors building a Chevrolet Camaro with enough horsepower to unseat the 2015 Challenger SRT Hellcat is that it will need at least 708 horsepower. Building a Camaro with that kind of power would give the muscle car bragging rights over the Challenger, but it would also overpower the Corvette Z06 by a significant amount. In the past, General Motors has made sure that the Corvette lineup had at least one model that was more powerful than the stoutest Camaro. Even when the Camaro and Corvette have relied on the same engine at the same time, the Corvette’s engine was rated slightly higher than the Camaro.

Sure, the Corvette Z06 and the Camaro ZL1 are two very different sports cars so they wouldn’t exactly compete with each other, but I refer to the fact that GM has made a point of keeping the Corvette slightly ahead of the Camaro. Because of that, I don’t think that GM will build a Camaro that will overpower both the Challenger and the Viper – but also the Z06. Some people point out that the Dodge Challenger SRT Hellcat offers a ton more power than the SRT Viper, so why can’t GM build a Camaro that will beat the Corvette?

Because the Corvette is selling well with a high price point and we can expect that the Z06 will also flourish, even with a price tag over $100,000. Viper sales have been fairly poor, but the 707 horsepower Challenger with a starting price around $60,000 is very likely to sell far better than the Viper. Like the Corvette and the Camaro, the Challenger and Viper are two very different performance cars so there will still be some people who pick the $103k+ Viper with 640hp over the $60k Challenger with 707. However, Chrysler really isn’t worried about the Challenger Hellcat stealing attention from the Viper…which really isn’t getting them much consumer attention right now.

We should also consider the fact that when Ford introduced the Shelby GT500 Mustang with 662 horsepower and 631lb-ft of torque, GM made no attempt to get the Camaro ZL1 over the 580/556 levels to fight with the Mustang. GM doesn’t want the Camaro to overpower the Corvette and the company has shown in the past that they won’t bother to play the horsepower race when they have a Corvette that will beat up the GT500…or the Hellcat.

The 2015 Chevrolet Corvette Z06 Should Handle the Challenger Hellcat
One other reason that General Motors may not build a 700+ horsepower Chevrolet Camaro is because the company already has a car that will happily do battle with the Hellcat powered Challenger SRT. The Z06 will “only” pack 650 horsepower and 650lb-ft of torque, but we can expect that the top of the line Corvette will weigh at least a thousand pounds less than the Challenger. This will allow GM fans an option to take down the Hellcat Challenger and the SRT Viper at the same time. 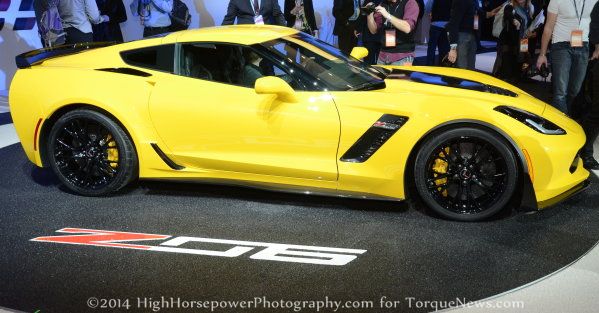 We don’t know what the 2015 Chevrolet Corvette Z06 will run in the quarter mile, but we know that the C6 ZR1 was capable of running an 11.3 elapsed time. That is just one tenth of a second slower than the Hellcat Challenger so when you factor in the lighter construction of the C7 Z06 and the added power from the LT4 V8, it will almost certainly outrun the Hellcat in a straight line with equal drivers. Needless to say, the Z06 will surely out handle the Challenger as well, but with the horsepower war usually being fought a quarter mile at a time – the 2015 Z06 should be able to take care of the Hellcat so that the Camaro doesn’t need to.

Auto Motive wrote on July 23, 2014 - 7:53am Permalink
The Z and hellcat are two different cars. The Z is a sports car and the hellcat a modern muscle car. The Z weighs in 1000 lbs lighter and is a true track car. The hellcat is a 707 hp dragon for the drag strip, bragging rights on the most hp for a $60k vehicle and you can take your grandkids to the cruises since it has a back seat. My daughter has a 392 challenger and my wife and I both drive it frequently. We are now convinced that the hellcat will be our next modern muscle car. We can tour the US in comfort, have a great cruise vehicle at shows, and spend $75k for a fully optioned hellcat. The Z will be another $25k and the grand kids have to stay home. Now to the Camaro ZL1 which should tip the scales at 3600 lbs a good 700 lbs less then the hellcat. In this hp vs wgt the Camaro just may be faster both in a straight line and at the track if equipped with the monster LT4. The Z LT4 supercharger is the smaller version 1.7 liter and with the current ZR1 2.7 the LT4 could easily push the 700 hp barrier so GM has a formula to top the hellcat. Let he hp wars continue.
tsundereeeeeee wrote on July 23, 2014 - 4:38pm Permalink
um, 1st off the price of 60K is base price for the hell cat. no interior package, navigation, HUD, track pack, suede pack, interior / feature trim level packs, high performance tire pack, with all that you're looking at 80K challenger and THEY are only making 1200 of them. and if they continue tradition that camaro has been doing for last 30 years, they will make the camaro focus on everyday usability and handling. with models like Zl1, 1Le, and Z/28. while ford and challenger will probably fight it out for faster straight line muscle / pony cars. but let us not forget GM just got the right secured for 3 "new" engine names from the past, LT5, L88 (forgot another one) and LT5 was the 1st ZR1 engine which i assume will be in 700 HP range and have some electric motors to add more power.
bigbusiness wrote on August 3, 2014 - 1:08pm Permalink
Dodge said there making 3200 and the first 1200 will be special editions! !
ElectricLucifer wrote on July 23, 2014 - 7:54am Permalink
The whole premise of this article is unproven and simply untrue. When design chief of GM's Camaro Z/28 was asked specifically if he had an edict by the GM Brass that he cannot overpower or outperform the Corvette model(s), he stated matter of factly that he was not bound by any of those conditions. So this author is simply regurgitating the myth instead of actually doing some homework on the subject. The real reason GM does not see the need to go after the Hellcat is simply because they have no reason to. The Camaro ZL1, Z/28, and the SS 1LE will outperform the Hellcat around the track every day of the week. It's not about having the highest hp # or going in a straight line any more for bragging rights. Even if it were, GM has a limited edition COPO to handle that task. GM's performance models stand head and shoulder above ALL OTHER manufacturers. They are at the very top of the heap.
dave wrote on July 23, 2014 - 5:09pm Permalink
Come on now.. you know you want a hellcat.
ElectricLucifer wrote on July 24, 2014 - 7:14am Permalink
I do like the Challenger's body lines and overall styling, but every time I'm in the market for a new vehicle I end up with a higher performing car for less $$. The hellcat, though, is a bit over-the-top looking imo, I prefer the 392 Core pkg with black on black...but as I said, Chrysler has priced themselves out of the segment
Frank wrote on July 23, 2014 - 12:36pm Permalink
The COPO Camaro does not come with a serial number and such can not be licenced on the street. Gm does not offer muscle car that will compete in a straight line with the Hellcat.
ElectricLucifer wrote on July 23, 2014 - 3:59pm Permalink
My point exactly. Biggest HP and straight line acceleration is not the standard for bragging rights any more. GM has nothing to compete with the Hellcat because there is nothing to be gained. The Hellcat cannot compete with the current lot of GM production vehicles already out there. But if straight line speed is your thing, get a COPO...which by the way has significantly less HP than a Hellcat, but will blow its doors off in any straight line test.
Tejonrata wrote on July 24, 2014 - 1:53pm Permalink
There are no reasons for withdraw The challenge. camaro owners just need to cry because Dodge has taken the crown of the musclecars. is stupid think that it is a sales competition. The true competition is on the streets. When you compare apples with apples or exactly V8 6.2 supercharged camaro owners feel defeated.