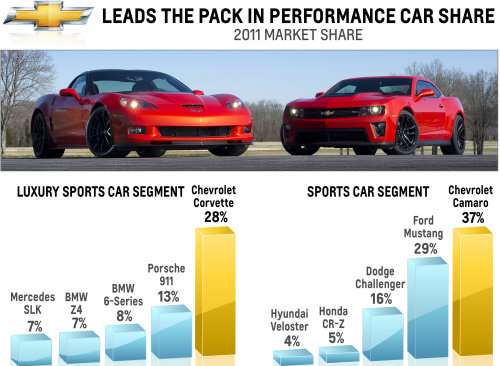 Chevrolet claims to be the top performance brand in the US

General Motors issued a statement this morning proclaiming that Chevrolet is the top performance brand in the US and while some American gearheads might dispute that – the General provided a bit of information to back up that lofty claim with the help of the Camaro and the Corvette.
Advertisement

Chevrolet’s claim of being the top performance brand in the US begins with two basic segments – the Sports Car segment and the Luxury Sports Car segment – with Chevy’s representatives in those two groups being the mighty Camaro and Corvette. General Motors’ first angle of claiming that Chevrolet is the top performance brand is based on the sales figures for those two vehicles (which is near impossible to dispute) and the second factor was the result of some recent track testing in Virginia.

“With the addition of the Camaro ZL1, there are only a handful of brands in the world with two cars that can match the performance, technology, and excitement of Corvette and Camaro,” said General Motors North America President Mark Reuss. “Unlike many competitors’ performance cars, the Corvette ZR1 and Camaro ZL1 are appropriate for both daily drivers and track use from the factory – with standard coolers for brakes and drivetrain. (We) challenge any company to bring two cars to compete with the Corvette ZR1 and Camaro ZL1, dollar for dollar. They will discover what enthusiasts already know – that Chevrolet Camaro and Corvette are the world’s best performance cars for the money.”

That is some pretty serious smack talk from GM’s boss over a hotly contested segment in the United States but when you look at the evidence that the company has provided along with the claim of being the top performance brand in the country – they have a pretty strong case.

The Chevrolet Camaro moved 88,249 units in 2011 while the second place vehicle in that Sports Car segment (the Ford Mustang) sold just 70,438 units – a difference of almost 18,000 vehicles sold. The Dodge Challenger was third in Sports Car sales with 39,534 muscle cars sold, less than half of what the Camaro sent out through 2011. Interestingly, GM lists the Honda CR-Z as the fourth bestselling car in the Sports Car segment with 11,330 vehicles sold (interesting because it’s a front wheel drive hybrid, sporty or not) and the Hyundai Veloster was fifth with 9,284 units sold.

The Chevrolet Corvette sent out 13,164 new models into the world last year, giving them a 28% share of the segment and a lead of over 7,000 compared to the next best selling Luxury Sports Car in the US, which was the Porsche 911 with just 6,016 units sold. The BMW 6 Series was third with 3,903 units sold followed by the BMW Z4 with 3,479 and the Mercedes SLK with 3,220 new models sold in 2011. When you do the math, the Chevy Corvette sold almost as many vehicles as did the Porsche 911, the BMW 6 Series and the BMW Z4 combined, falling around 200 units short of their combined sales figures.

However, General Motors didn’t just want to reference sales figures when claiming to have the top performance brand in the US so they took their performance flagships – the Chevrolet Camaro ZL1 and the Chevrolet Corvette ZR! – out to Virginia International Raceway for a little track testing with very impressive results.

The venue was the VIR Grand Course, which is a 4 mile track that has been compared to the German Nürburgring, offering a great look at a vehicle’s overall performance capabilities. As the first video below shows, the 2012 Corvette ZR1 with Corvette engineer and regular Corvette test driver Jim Mero at the wheel was able to lap the VIR Grand Course in just 2:45.6 – making the Corvette ZR1 the fastest production car to ever lap the course. The second video shows the 2012 Camaro ZL1 on that same VIR course with engineer Aaron Link at the helm blowing through the course with a time of 2:52.4, making the super Camaro 6 seconds quicker than the 2011 Ford Shelby GT500 on that same track.

Check out the videos below of the 2012 Corvette ZR1 and the 2012 Camaro ZL1 with their recent runs at VIR and tell us in the comments what brand you think is the top dog in terms of performance in the USA. When you look at the fact that the Camaro and Corvette are the top models in terms of sale and both vehicles offer performance measures that put them atop their respective classes - GM's claim is tough to dispute.