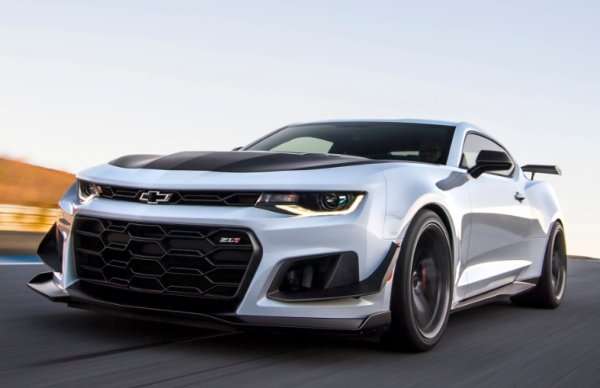 General Motors hasn’t announced a Nürburgring lap time for the new Chevrolet Camaro ZL1 1LE, but based on what we know about this newest Chevy muscle car and what we know about past performances from other Camaros – the ZL1 1LE has a very real chance of laying down supercar-like times at the Nürburgring.
Advertisement

When Chevrolet introduced the new Camaro ZL1 1LE, we learned all about this new high performance package and we learned that this was likely the car which was infamously caught on video crashing at the Nürburgring. When the new 1LE package was introduced with the Multimatic DSSV (Dynamic Suspension Spool Valve) suspension setup, lightweight wheels wrapped in high performance tires, the prominent aerodynamic design and a reduced curb weight, the company announced that it was 3 seconds faster than the “regular” ZL1 around the 2.9-mile course of GM’s Milford Proving Grounds.

There was no track time for the new Camaro ZL1 1LE at the Nürburgring, but that could be because of that infamous crash video. There is also the chance that GM made good laps with the new ZL1 1LE before crashing it and they are just waiting to announce that time, but in any case – this supercharged beast might be able to turn in some incredibly quick laps at the Nürburgring.

The new Camaro ZL1 turned in a best lap time of 7:29.60, which is almost 8 seconds quicker than the 5th generation Camaro Z28, which lapped the Ring in 7:37.4. Mind you, the Z28 ran that number in the rain, so its record would have likely been quicker had there been better conditions, but 7 minutes and 37.4 seconds was still the quickest American muscle car at the Nürburgring ever – until the new Camaro ZL1 came along.

While that number is nothing more than speculation based on previous Camaro Nürburgring lap times and the Milford Proving Ground for the 6th gen cars, it seems possible. If the ZL1 1LE could get into that 7:24 range, it will officially be quicker around the world’s toughest road course than some very high end supercars. To name a few, the Ferrari Enzo, the Lamborghini Aventador, the Mercedes Benz AMG SLS Black Series and the 2009 Chevrolet Corvette ZR1 all turned in slower lap times at The Ring, so more than ever, the Chevrolet Camaro is debunking the myth that “muscle cars can’t turn”.

With any luck, General Motors will soon announce the Nürburgring lap times for the new ZL1 1LE package, along with some numbers for the C7 Corvette Z06.