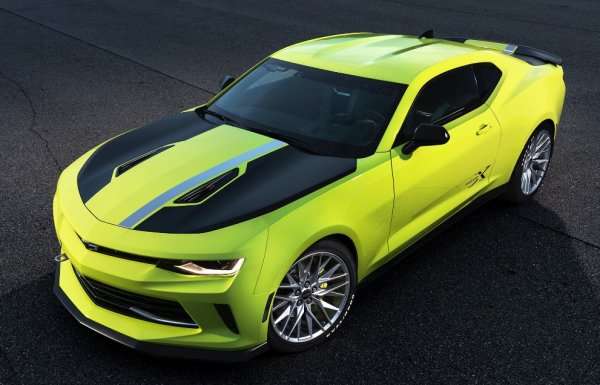 While the vast majority of the cars on display at the 2016 SEMA Show are powered by V8 engines, the Chevrolet Camaro Turbo AutoX Concept stresses the performance capabilities of the new base engine and in does so in a color which makes it impossible to miss in the Las Vegas Convention Center.
Advertisement

Most of the cars on display at the 2016 SEMA Show will be powered by V8 engines with forced induction, especially among American muscle cars like the Chevrolet Camaro, but General Motors is showing off the performance potential of the base model Camaro with the 4-cylinder engine with the Turbo AutoX Concept.

Camaro Turbo AutoX Concept
The base engine for the 2016-2017 Chevrolet Camaro is the new 2.0L turbocharged 4-cylinder and while this is the least powerful of the available Camaro engines, it is also the lightest. The low weight can lead to improved handling, so when Chevrolet Performance looked to build a production-friendly concept that focused on high performance handling from a low cost model, the turbocharged base model Camaro seemed like the perfect fit.

First, to increase the power of the turbocharged engine, the Camaro Turbo AutoX Concept has a cold air intake, a full exhaust system and a custom engine tune, but GM doesn’t state just how much power this concept offers.

“It’s a great engine for an autocross course because the strong torque production means you can hold a lower gear and just run through the cones without constant shifting,” said Mark Dickens, director of Performance Variants and Parts. “And with the concept handling package providing amazing handling, this car is simply a blast to drive ― and a real surprise for some of the tuner drivers.”

Finally, like every good SEMA car, the Camaro Turbo AutoX Concept gets a list of exterior dress-up modifications including the vented Camaro SS hood, the Camaro SS chin spoiler, a new Chevrolet Accessories rear wing and both the rear diffuser and the side sills from the Chevrolet Accessories ground effects package. The finishing touch is the striking Shock Yellow paint with Carbon Flash accents and unique concept badging.

This might be too extreme of a package build to become a production model, but the Camaro Turbo AutoX Concept is comprised mostly of current Chevrolet Accessories or Camaro SS parts, so a new 4-cylinder Camaro owner who wants to build their own Turbo AutoX can do so with relative ease.