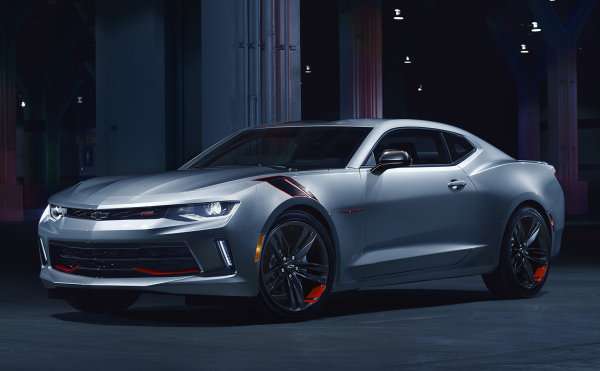 Chevrolet announced this morning that the new Camaro Redline special edition series will be available sometime during 2017 and making this the most widely-offered package in the company lineup – there will also be a Redline edition version of 7 other cars, trucks and SUVs.
Advertisement

Back in 2015, Chevrolet Performance showcase a broad selection of Redline Series concept cars at the SEMA Show in Las Vegas, including the Camaro, the Malibu and a handful of other vehicles. Those uniquely decorated SEMA show vehicles proved to be so popular that Chevrolet will offer the Redline package on a variety of vehicles over the next year or so.

The announcement of the new Chevrolet Redline special edition series doesn’t focus on the Camaro, but with that being one of the most popular vehicles among our regular readers, that is the focus of this piece. A similar Redline package is being offered on the Cruze LT, the Malibu LT, the Trax LT, the Equinox LT, the Traverse Premier, the Colorado LT and the Silverado LT Z71 in either Double Cab or Crew Cab form.

Of course, there are some slight differences in the features of the Redline edition from one vehicle to the next, but all-in-all-, the unique appearance upgrades of the Camaro Redline special edition series are shared across all of the aforementioned vehicles. This is purely an appearance package, but the resulting vehicles have a sharp look which will almost certainly be popular with buyers who are looking for sportier vehicles.

“Redline is another example of Chevrolet bringing SEMA concepts to showrooms,” said Brian Sweeney, U.S. vice president of Chevrolet. “The SEMA show has proven to be a great way to identify customization trends in the industry, and quickly apply those trends to our most popular Chevrolet models. Based on the strong interest Redline attracted at the show, we believe they will be very popular with customers looking for standout cars, trucks, and crossovers.”

The Chevrolet Camaro Redline Edition
The Chevrolet Camaro Redline special edition series is available with the LT or SS trimline, so buyers will be able to pick any of the available engine and transmission options. The Redline package adds unique 20 inch black wheels with red hashmarks, black model and trimline badges with bright red trim, black grilles and black Chevy bowtie logos. All of those features are included in the Redline edition package for every vehicle on the list above, although there are some slight differences, such as the size and construction of the wheels.

The unique features of the Camaro Redline edition are the bright red accents in the lower grille opening and the black-and-red stripes on the fenders, just above the front wheels. The hashmark design has long been used in the world of Chevy racing and this is a great addition to the Redline Camaro.

Redline Availability
While the new Redline special edition series will be offered on 8 different Chevrolet vehicles, they will not all be offered at the same time. The Silverado will be the first vehicle to get the Redline edition and those uniquely colored pickups can be ordered at your local Chevy dealership right now. There is no rollout plan detailed for the other vehicles, but GM promises that the Camaro Redline will be available before the end of the 2017 calendar year.

If the Redline Camaro doesn’t arrive until much later this year, it could be a 2018 model, as the press release doesn’t specify model years for any of these vehicles. However, whenever the Redline Camaro arrives – I expect that it will be a popular option with the scores of Camaro fans who loved the look of the SEMA Show concepts a few years back.

Tesla Giga Berlin's New Hurdle: It's Not Only the Gov't, but Now Tesla Itself
Teslas Are Sold Out Until 2023, But The Timing May Reverse
END_OF_DOCUMENT_TOKEN_TO_BE_REPLACED