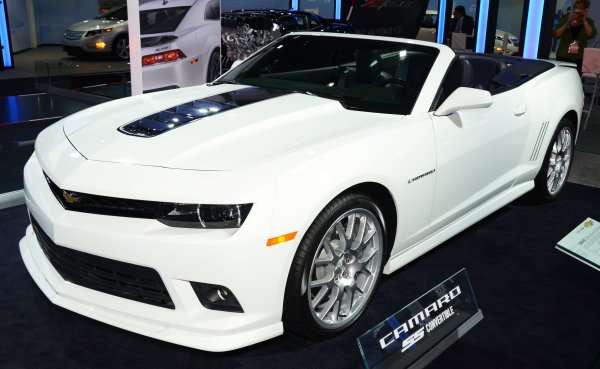 For the third straight month, the Chevrolet Camaro beat the Ford Mustang and the Dodge Challenger in monthly sales, with the small advantage in June 2014 allowing the Camaro to build its annual lead as GM strives for a stunning 5th straight yearly muscle car sales title.
Advertisement

After the Chevrolet Camaro, the Ford Mustang and the Dodge Challenger all put up very strong numbers in May, sales dropped significantly across the board in June 2014. This drop in sales makes sense for the Mustang and the Challenger, as prospective buyers might be waiting for the 2015 models that are set to hit the market within the next few months. While we are almost certain to see a big spike in Mustang and Challenger sales when the 2015 models arrive, we also expected to see a drop in sales just before the dealership launch of the new models. On the other hand, the big drop in Camaro sales is surprising considering that GM hasn’t offered up any information on the next generation Chevy muscle car.

The Camaro Continues to Lead
The Chevrolet Camaro did in June 2014 what it has done so frequently since being reintroduced for the 2010 model year – beating both the Ford Mustang and the Dodge Challenger in monthly sales. GM sold 7,721 new Camaro coupes and convertibles last month which represented a massive drop from the monster month in May, but it still accounted for a year over year increase when compared to the same month in 2013. The Camaro grew by 6.7% relative to June 2013 and that minor growth was just enough to beat the Mustang…by just 90 units to be exact.

On the year, the Chevrolet Camaro has shown positive growth compared to the first six months of 2013 with 46,672 units sold this year accounting for a 10.3% improvement. More importantly, that figure affords the Camaro a lead in the annual sales race of just under 2,500 units over the Ford Mustang.

The Ford Mustang Falls Hard in June
The Ford Mustang had a very strong month in May followed by a drop of some 20% in June 2014 when the Motor Company moved “only” 7,631 new coupes and convertibles. The Mustang trailed the Camaro by only 90 units, but that still allowed the Camaro to beat the Mustang for the third straight month and the fourth time this year. The 2015 Mustang is expected to arrive in dealerships within the next few months and as consumers hold off for the new models – or for the deep discounts that will be applied to 2014 models once the next generation arrives – we knew that there would eventually be a big drop in sales. It appear that the drop we expected hit in June 2014. Fortunately, the Mustang still sold well enough to challenge the Camaro – but it fell just short.

On the year, Ford Motor Company has sold 44,231 new Mustang coupes and convertibles – a figure which shows a surprising increase of 2.6% compared to the first half of 2013. Even with the impending drop in sales, the Mustang has managed to outpace 2013 sales and when the 2015 models arrive later this year, we can fully expect to see some massive sales numbers for the mighty Mustang. That spike should be enough for the Mustang to prevent the Camaro from claiming its 5th straight annual sales title, but only if the Mustang can keep the race close before those new models (or big discounts on older models) arrive.

The Dodge Challenger Sees a Similar Drop
After the Dodge Challenger posted one of its best months since being introduced for the 2008 model year, the brawny Mopar muscle dropped quite a bit in June 2014. With 4,377 units sold, June wasn’t all that bad of a month and it was far from the worst month of the year – but it was still a big drop compared to the month before. It can be assumed that like prospective Mustang buyers, prospective Challenger buyers are holding off for the new and improved 2015 Dodge Challenger that will hit dealerships around the country later this year.

On the year, the Dodge Challenger is the only Detroit muscle car that is down for the year following very slow sales months to start the year, but we can expect to see those numbers climb later this year when the 2015 Challenger arrives.