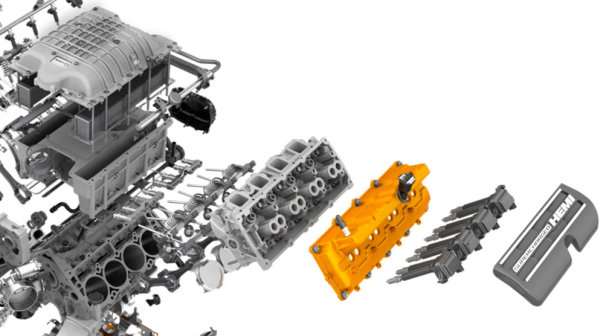 Now that we know how much power the new Hellcat Hemi will make in the 2015 Dodge Challenger, it is very clear that a Hellcat powered Jeep Grand Cherokee will annihilate any performance SUV that the European supercar makers can come up – leaving the owners of the far more expensive German and Italian sport utes crying in their overpriced beer.
Advertisement

A while back, we talked about the possibility of a future SRT Jeep Grand Cherokee powered by the 2015 Dodge Challenger’s Hellcat Hemi and how that supercharged Jeep would give a strong run to the likes of the high performance SUVs from Porsche, BMW, Mercedes, Range Rover, Lamborghini and Bentley. At that time, we only knew that the Hellcat Hemi would offer at least 600 horsepower and at least 575lb-ft of torque. Based on those numbers, the Jeep SRT Hellcat would make short work of the best from Porsche, BMW, Mercedes Benz and Range Rover, but it might struggle with the likes of the upcoming Lamborghini Urus and Bentley EXP9 SUV.

Now that we know that the 2015 Dodge Challenger SRT Hellcat will pack 707 horsepower and 650lb-ft of torque, that same engine packed under the hood of the Jeep Grand Cherokee would unquestionably make for the baddest SUV sold anywhere in the world. Also, that much power – even in a vehicle as heavy as the Jeep Grand Cherokee – would likely make it one of the best performing vehicles sold in the world so in addition to pummeling every SUV, it would likely beat a great many sports cars as well.

Bentley and Lamborghini Might Pose the Biggest Challenge
Should the Chrysler Group opt to install the supercharged 6.2L Hemi V8 in the future Jeep Grand Cherokee SRT, a similar power rating to the Challenger’s 707 horsepower and 650lb-ft of torque would allow the high performance Jeep to easily beat down anything from Porsche, BMW or Mercedes. The most powerful production SUV available right now is the BMW X6M with 555hp and 500lb-ft of torque so with over 700 horsepower, the Jeep could handle the BMW a painful beat down. The Porsche Cayenne Turbo S, the Mercedes Benz G63 AMG, the Mercedes Benz ML63 AMG and the Range Rover Sport Supercharged all have less power than the X6M so those models would all be likely to face a similar fate to the BMW when racing the Hellcat Jeep.

The biggest competitors would be the Lamborghini Urus and the Bentley EXP9. These two SUVs – both of which are owned by the Volkswagen Auto Group - are expected to battle for the title of the best performing SUV in the world…or at least they will be if the Hellcat doesn’t end up in the Grand Cherokee. The Lamborghini Urus will likely be powered by a twin turbocharged V8 with somewhere in the area of 600 horsepower and 600lb-ft of torque. The Bentley EXP9 (which will likely have a different name when it reaches production) could be powered by VW’s 12 cylinder engine that delivers upwards of 650 horsepower.

As you probably noticed, the estimated power figures for both the Lamborghini Urus and Bentley EXP9 are well below the output of the Hellcat Hemi, so a Jeep Grand Cherokee packing the supercharged 6.2L V8 will very likely beat those two future SUVs just as badly as it will beat the high performance SUVs already on sale today.

Could the Hellcat Hemi Jeep Happen?
When considering whether the Chrysler Group would really build a Hellcat Hemi powered Jeep Grand Cherokee, there are a few questions to be asked.

Will the Hellcat Hemi fit in the engine bay?
Over the past decade or so, the Jeep Grand Cherokee has featured the same engines as the Dodge Challenger including the 3.6L Pentastar V6, the 5.7L Hemi V8, the 6.1 Hemi SRT V8 and the 6.4L Hemi SRT V8. This leads me to believe that any engine that will fit in the Challenger will fit in the Grand Cherokee so in terms of the Hellcat Hemi physically fitting – it almost surely would.

Would the Chrysler Group want to put the Hellcat in the SRT Jeep?
Building the Jeep Grand Cherokee SRT Hellcat with 707 horsepower and 650lb-ft of torque – or even with power figures close to that – would comfortably make it the most powerful production SUV in the world. That Jeep would beat any high performance sport utility vehicle available now or coming in the near future…and I think that would be a claim that the Chrysler Group brass would find very appealing.

Can Chrysler price a Hellcat Grand Cherokee in a way that they can compete while still making money?
The current Jeep Grand Cherokee SRT has a price in the high $60k range. The current Challenger SRT with the same 392 engine runs around $42k, so the similarly powered Jeep is around $18,000 more than the Challenger. It is expected that the Challenger SRT Hellcat will cost somewhere in the range of $65,000 to $75,000 so if the Hellcat Jeep was $20,000 more, it would have a price in the $85,000 to $95,000 range. That is a whole lot of money, but it is less than the high end SUVs from BMW, Porsche, Mercedes Benz, Bentley or Lamborghini.

Would people buy a 707 horsepower Jeep?
Buyers are lining up to pay in the high $60k range for the 470 horsepower Jeep Grand Cherokee SRT so I believe strongly that there would be a market for a $90-95k Jeep with 700 horsepower. It would be a different crowd and a smaller crowd, but the Hellcat Jeep would be ideal for the Viper owner who wants to be able to get around in high performance style in the rain and snow.

Would the rest of the Jeep drivetrain stand up to that power?
This is the one sticking point, as the four wheel drive components of the Jeep Grand Cherokee SRT would be the biggest question mark. The current Jeep SRT uses a similar 8-speed automatic transmission to what is used in the Challenger and with the 2015 Challenger SRT Hellcat packing a new, stronger version of the 8-speed automatic transmission, there is already a transmission ready for the Jeep. However, the transfer case and other 4WD components of the Jeep SRT are designed to handle 470 horsepower and 470lb-ft of torque..so jumping to over 700 horsepower and 650lb-ft of torque would definitely take some beefing up.

Of course, the end result would be the most powerful production SUV ever sold and with a price tag that could almost Viper the mighty Viper – there seems to be a very strong business case a Hellcat Jeep in the future.

THABO MOKOENA wrote on July 3, 2014 - 12:54pm Permalink
I WOULD DEFINITELY BUY IT WITH THAT KIND OF POWER WORTH MY CASH EVEN THOUGH I KNOW THAT ITS GOING TO BE OVERPRICED IN SOUTH AFRICA
rdsOLDschool wrote on July 3, 2014 - 6:35pm Permalink
With a new bar set by the Hellcat, the fun has just begun. Thing's are looking up here in states. You now got a lot to talk about Patrick. A Big "Thank You" to Dodge would be appropriate for all and any columnnist. What say you Patrick?
Jim wrote on August 1, 2014 - 6:15am Permalink
Just a short comment hoping Chrysler is listening to consumers...... Put the Hellcat engine in the Jeep and I will be the first in Minnesota to order one!!!!!!
eric wrote on August 24, 2014 - 11:25pm Permalink
Please put the hellcat motor on the 2015 grand cherokee srt.
N. Flanders wrote on August 28, 2014 - 7:31pm Permalink
Sign me up - will purchase this on day 1 if they build it. (Just keep it under six figures, please)
alois buecker wrote on September 1, 2014 - 11:59am Permalink
built that Grand cherokee hellcat and offer it in Germany, and i am gonna be the first one to buy it
MICHAEL TOBACK wrote on September 8, 2014 - 4:21pm Permalink
This is my 2 Jeep srt I have a 2014 I will be first on list to trade up so just BUILD it M:)
Shameer H. wrote on November 23, 2014 - 5:49am Permalink
A 2015 JEEP SRT8 Hellcat will be a great addition to the SRT8 lineup. Well planned with efficiency in mind will definitely redefine quality and craftsmanship to other manufacturer. Well worth it.
santini wrote on March 5, 2015 - 10:08am Permalink
I HOPE THEY WILL BUILD THIS TRUCK I ALL READY HAVE ONE 2014 I WOULD DEFINITELY TRADING MY FOR THE HELL CAT