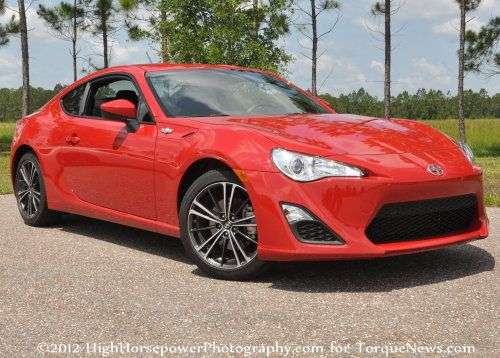 Can the Scion FR-S compete in the American sports car segment?

Since the first official information was offered up for the 2013 Scion FR-S months ago, there has been a great deal of speculation about whether or not the output of the naturally aspirated Boxer engine would be enough for the FR-S to feel like a sports car and I admit that I am among those people who questioned the new Scion’s place in the sports car world - until I drove one.
Advertisement

The 2013 Scion FR-S is powered by a 2.0L Subaru motor that yields 200 horsepower and 151lb-ft of torque; numbers that make it the one of the least powerful sports cars in the American auto industry. The FR-S will enter the hotly contested rear wheel drive sports car segment, taking on the likes off the Ford Mustang, the Dodge Challenger, the Chevrolet Camaro, the Nissan 370Z and the Hyundai Genesis Coupe. Out of that grouping, the least powerful vehicle is the 4-cylinder Hyundai Genesis Coupe 2.0T which packs 274 horsepower and 275lb-ft of torque so the FR-S is clearly at a massive disadvantage upon entering the segment. However, the engineers at Subaru and Toyota put a tremendous amount of effort into the chassis and body design of the new joint venture sports car and the result is a car that might not offer the most acceleration in the class but it is among the lightest and most well-balanced car in the segment. It was this lightweight design that helped bring some of the most well known Japanese sports cars in history into the limelight, packing low(ish) power outputs from high revving engines and an ultra light chassis design that allows the driver to stop and turn on a dime. That is an equation that has proven to be successful in the Japanese market but will the handling capacities of the FR-S be enough for the new Scion rear drive sports coupe to compete in the US?

To answer that question, I headed to Jacksonville Florida with the folks from South Eastern Toyota (SET) to spend a few hours driving the 2013 Scion FR-S - both in manual and automatic trim - around the backwoods area in which SET makes their home.

The Exterior
When you look at the 2013 Scion FR-S, there is no question that the exterior design fits the bill of a modern sports car. The FR-S is long and low, with high wheel arches, a long hood and a roofline that flows smoothly from the cowl to the trunk lid. While diehard American muscle lovers might scoff at the design of the FR-S, Subaru and Toyota/Scion did a fantastic job in the design process and the result is a car that looks like its made to go fast. In a segment where “looking fast” can go a long way in attracting buyers - the FR-S does just that. Unfortunately, real sports car lovers aren’t going to be appeased by a car that offers sleek, sporty exterior design.

The Interior
Inside, the 2013 Scion FR-S features a cockpit design that puts everything well within the reach of the driver. The interior is simplistic, with a three gauge cluster tucked behind the compact, sporty steering wheel. While there is a high end infotainment system with a large screen available, my 2013 FR-S test cars were both fitted with the standard sound system – one with actual knobs and buttons. The HVAC system also uses nice big, easy to understand knobs and buttons that are simple to adjust without taking your eyes off of the road. The leather wrapped steering wheel has a great feel to it and beyond that wheel is the three gauge cluster featuring a massive central tachometer; with the speedometer on the left side and the fuel gauge/temperature gauge cluster found on the right side.

The 2013 Scion FR-S has race inspired seats that are very deep, with massive bolsters working to keep the driver and passenger tucked safely in their seats under hard cornering. The seats in our test cars were black with red stitching and trim so they looked as good as they felt during the drive. I didn’t spent any time in the back seat but with the front seats adjusted to accommodate two near-6’ front riders; there was very little legroom for the rear passengers. Unfortunately, this is a common trait of the sports car world so, when combined with the cockpit design and the sporty front seats – the interior of the Scion FR-S definitely looks and feels like a true sports car.

The Drive
My seat time in the 2013 Scion FR-S began with a model fitted with the 6-speed manual transmission and while the automatic transmission for the FR-S is a great unit (which we will discuss later) – the manual transmission allows more control and better use of the available power. At first, I drove the FR-S gently as I got a feel for the different aspects of the vehicle but with a tight clutch and short shift throw, the FR-S instantly feels like a sports car. The 2.0L Boxer engine is pretty quiet under gentle driving but when you climb into the RPMs (and it loves big RPMs), the motor offers a surprisingly throaty grumble for a naturally aspirated 4-cylinder engine. The FR-S is very mild mannered when puttering around town but after a few minutes of this grandmotherly driving, it was time to put the hammer down.

I turned the traction control off on a private road in the middle of nowhereville Florida and even with “only” 200 horsepower and 151lb-ft of torque, the 2013 Scion FR-S is very willing to smoke the rear tires en route to a surprisingly quick climb through first gear. The transmission in the FR-S is easy to learn and it is very easy to rip from gear to gear at high RPM with a slight chirp of the rear tires after a few of those shifts. Now, understand that with quarter mile times reportedly in the high 15 second range, the FR-S isn’t going to be a dragstrip monster (in stock form) but the acceleration is much more impressive than you would think, based on the power figures. The only place where the FR-S feels light on power is at the lower end of first gear when launching from a stop but through the other gears, once you have gotten the RPMs up, the FR-S is willing to accelerate in a hurry.

The 2013 Scion FR-S wasn’t built to drag race and Toyota makes no bones about that; instead emphasizing the handling capacities of the new rear wheel drive sports coupe. The low center of gravity, the wide track, the sport tuned suspension and the extremely low curb weight allows the FR-S to be incredibly nimble both on long, high speed turns along with when making hard, tight turns at low speed. This is one of those cars that seems to grow more stable as you climb into the higher speeds as the aerodynamics of the car force it to the ground. When blasting along these back country roads, we encountered a variety of long, sweeping turns where some sports cars will struggle to maintain speed without the driver allowing the car to wander towards the outside of the turn. On the other hand, the FR-S has very little noticeable “push” through these long turns and it really just begs to be pushed harder in these types of turns.

Our drive route also included some very tight turns that came at the end of what was a higher speed area for the 2013 Scion FR-S and between the braking system and the handling capacities, the new sports coupe is able to make turns that measures greater than 90 degrees very quickly. In these types of turns, there is a shade of understeer as you exit the turn but the FR-S is quick to grab and go. Also, with a handbrake mounted next to the shifter, the FR-S can very easily be downshifted and drifted through tight turns with the help of the parking brake – although that is something that shouldn’t be attempted unless you have some experience doing such maneuvers. One thing that I can say for sure – there is no question why Scion chose to show the new FR-S drifting in the first US commercial as this is a car that loves to be thrown through turns – whether braking and driving out or ripping the e-brake and letting the back end slide around the front on your way out of the corner. The ride is stiff, as you would expect with a car that handles so incredibly well, but it is still comfortable enough when driving in a civilized manner. That being said…if you are that worried about ride quality, you should probably be shopping in a different segment.

I also had a chance to spend some time in a 2013 Scion FR-S fitted with the 6-speed automatic transmission. This setup offers manual shifting via the paddle shifters on the steering wheel and Toyota/Subaru have done a fantastic job preserving the fun to drive spirit found in the manually shifted models. The automatic transmission does bog down acceleration a bit but the shifting system is one of the best that I have experienced – offering an incredible amount of control when upshifting and downshifting. The paddle system features “bump shift” capabilities that send the RPMs soaring through the roof when popping back into 1st gear while moving but this system does an amazing job of keeping the FR-S right in the power range. While acceleration is slowed by the automatic transmission, the car still slams through gears and is almost as much fun to drive as the manual models.

The Final Word
The 2013 Scion FR-S is one of the most entertaining cars I have driven and with a price starting under $25,000 – it allows a great deal of “fun for the buck” in terms of sporty driving characteristics. You aren’t going to be winning a great many heads-up drag races in the Scion FR-S but we can expect these new Scion and Subaru sports cars to be terrors on the road course and autocross track.

I entered my drive time in the 2013 Scion FR-S as a major skeptic and a longtime lover of American muscle but after spending a few hours sliding around turns and soaring down backroads – the FR-S has made me a believer. This new sports car is everything that popularized Japanese sports cars back in the day and while it might not look like much on paper, the FR-S is a great deal of fun to drive. Devout drag racers might not love the abilities of the FR-S in stock form but for those who want to be able to hang with muscle cars on the autocross or full road course – the 2013 Scion FR-S is one car that you definitely have to drive before passing judgment on the new Japanese sports coupe. This car put a huge smile on my face and it only took a couple hard turns for me to forget all about the svelte power numbers – as the 2013 FR-S is every bit as much fun to drive as the other cars in the class and with a price under $25k, it costs far less than the competitors that stand the best bet of beating the FR-S up in a head to head battle.

In short, while I have always owned at least one American sports car powered by a high performance V8 engine, I fully expect to see the 2013 Scion FR-S reach the sales goals set out by the company over the next few years…so, yes…the Scion FR-S should be a competitive force in the sports car segment.