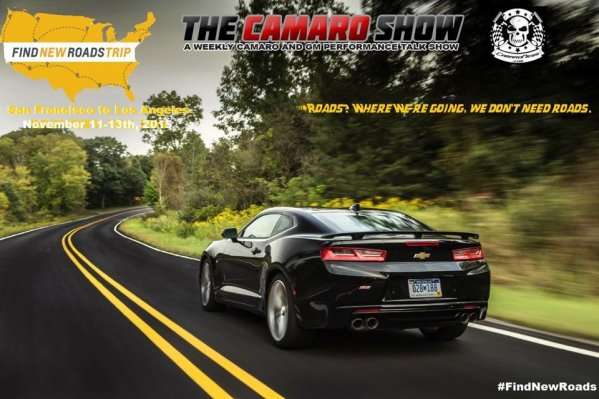 The Camaro Show Finds New Roads in the 2016 Camaro

As part of the ongoing 2016 Chevrolet Camaro road trip campaign titled the Find New Roads Trip, Chris Frezza of The Camaro Show and Jason Port of CamaroNews will be driving a 6th generation Camaro from San Francisco to Los Angeles – and you can follow along with the crew via a handful of social media venues.
Advertisement

Over the past week or so, teams of two have been driving a fleet of 2016 Chevrolet Camaro coupes all over the United States as part of General Motors’ Find New Roads Trip. This group of handpicked media personalities pick up the car in one location and drive it to another, stopping along the way to take pictures of the 6th gen Camaro in interesting places and sharing those pictures on social networks like Facebook, Twitter, Snapchat, Periscope and more. Along the way, there are events where Camaro fans will have a chance to see the 2016 model in person, but for those who cant check it out in the flesh, you can catch all of the action by following the right people on those social networks.

The Camaro Show Drives the 2016 Camaro
I had a chance to speak with Chris Frezza of The Camaro Show, and he gave me the rundown on what was planned for his leg of the 2016 Camaro Find New Roads Trip. Frezza will be joined by his friend and fellow Camaro expert Jason Port of CamaroSix.com and CamaroNews.com, and the two will begin their road trip in San Francisco, California.

They start off with a special event on Wednesday night in San Fran and come Thursday morning, they will participate in a key drawing to see which groups get a 2016 Camaro SS and which get the 2016 Camaro LT – or deciding who gets the 3.6L V6 and who gets the 6.2L LT1 V8. After they find out which variety of 2016 Camaro they will be driving, Frezza and Port have until 5pm Friday to make it to a designated location in Los Angeles.

According to Mapquest, San Francisco is about 380 miles from Los Angeles, so depending on traffic, it is a drive that could take anywhere from 6 to 8 hours. Fortunately, Frezza and Port have more than a day to make their way from San Fran to the City of Angels, allowing them to take in some sights with their 2016 Camaro along the way. Of course, we can also expect plenty of information and insight from these long –time Camaro experts as they drive the new Camaro in the real world for the first time.

If you want to follow along with Chris Frezza and Jason Port as they take the 2016 Camaro on the Find New Roads Trip, you can do so via the Camaro Show Facebook Page, on Instagram @CamaroShow, on Twitter @ChrisFrez or at the websites CamaroNews.com and CamaroSix.com.

Image courtesy of The Camaro Show

Виктор wrote on November 12, 2015 - 1:56am Permalink
Chevy is sending dozens of auto writers throughout the country on a Find New Roads trip in which it hopes to traverse all of the lower 48 states.