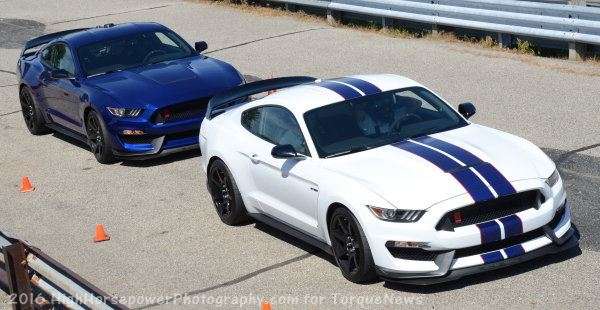 The sales numbers for June 2016 are still rolling in but we already know that the Ford Mustang led the way in the muscle car segment for the 20th consecutive month, as the Chevrolet Camaro continued its sales slide – dropping under 5,000 units for the first time since late in 2014 and trailing the Dodge Challenger for the 2nd month in a row.
Advertisement

June 2016 really wasn’t a great month for the muscle car segment, with the Ford Mustang, the Dodge Challenger and the Chevrolet Camaro all posting month-to-month and year-to-year declines in sales volume, but it was a much better month for the Mustang and Challenger than it was for the Camaro.

The Mustang Continues to Dominate
In June 2016, Ford sold 9,776 examples of the Mustang, allowing the original pony car to once again lead the modern muscle car segment. June marks the 20th straight month where the Mustang has outsold the Chevrolet Camaro and the Dodge Challenger, dating back to November of 2014. Mustang sales were down from the month before and when compared to the same month last year, but with the entire segment down – the Ford Mustang still led the way by a considerable margin.

On the year, Ford Mustang sales are down a bit, as the push for the new generation has started to slow (after almost two years), but with 62,965 Mustangs sold during the first half of the year – Ford still has a gigantic lead over the competition in the annual sales race.

The Challenger Sits Second
While the Dodge Challenger has beaten the Camaro and the Mustang in the monthly sales race off and on over the past five years, May and June mark the first time that the Mopar muscle car has beaten one of the competitors two months in a row. Thanks to the slow sales of the new Camaro, the Challenger’s total of 5,479 units sold in June allowed the Dodge to finish 2nd in the segment for back to back months.

Camaro Reaches a 2-Year Low
Sales numbers for the 2016 Chevrolet Camaro have inexplicably continued to slump, with just 4,969 units sold in June 2016. This is the lowest monthly sales total for the Camaro since November 2014 and over the past 5 years, June 2016 is the 5th worst month in terms of sales volume. Compared to the same month last year, when only the 5th gen Camaro was available, June 2016 sales are down 42%.

The new Camaro is better than the previous model in every way, in my opinion, and I can’t wrap my head around the slow sales of the new model. I imagine that the folks at the GM headquarters feel the same way, as compared to the first half of 2015 – the first half of 2016 has been 13.5% worse for the Camaro. With just 36,834 units sold thus far, it seems very unlikely that the Camaro will make any sort of run at the 2016 muscle car sales title and at this point, a few more slow sales months could move the Camaro to 3rd in the annual sales race.