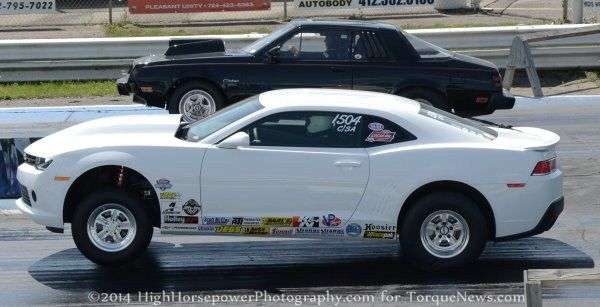 All of the attention in the muscle car world was focused on the Ford Mustang and Dodge Challenger last month, but that didn’t stop the Chevrolet Camaro from once again posting the best sales figures in the segment – beating both of the cross town rivals and extending its lead as Chevy looks for their 5th straight annual sales title.
Advertisement

As the warm weather has officially (and finally) reached all corners of the United States, this is the time of year where sales numbers for vehicles like the Chevrolet Camaro, the Ford Mustang and the Dodge Challenger flourish. When you take the sales rush expected in these warmer months and you add in the amount of media coverage surrounding the 2015 Ford Mustang and 2015 Dodge Challenger, we would most certainly expect to see strong sales numbers from those two muscle cars…but they weren’t strong enough to take the monthly sales win from the Chevrolet Camaro. In fact, with the best numbers that the Camaro had posted in the past few years, the Camaro very comfortably led the segment in sales for May 2014 and in doing so, GM extended their lead over the other two American muscle cars.

In May 2014, General Motors delivered 10,340 new Chevrolet Camaro coupes and convertibles to happy customers around the US. This is the first time in years that the Camaro has topped the 10k mark in monthly sales, making May the best month for the Camaro since April 2012 when the company sold 9,627 Camaros. This strong month marks a whopping 30% increase over the same month last year…and who said that the 2014 refresh wasn’t going to help? On the year, GM has now sold 38,951 Camaros – up 11% from the same period of time in 2013.

The Ford Mustang posted its best sales month since early 2012 in May 2014 with 9,761 units sold, but due to the huge month by the Camaro, the Mustang finished second in monthly sales. While Ford Motor Company certainly isn’t happy that their Mustang isn’t the bestselling muscle car in the US, the more important news is that the Mustang posted an 11% gain in May and while leading the segment is nice – growth is the most critical number. On the year, the Ford Mustang has moved a total of 36,600 units – up 8% from the first five months of 2013 – but the mighty Mustang still trails the Camaro in annual sales by roughly 2,300 units. The good news for Ford is that with the next generation Mustang set to arrive late this year, there should be a massive spike in sales…although the lead amassed by the Camaro up to that point could prove to be too much to overcome and if that is the case, the Camaro will lead the segment for the 5th straight year.

Last and technically least is the Dodge Challenger, which moved 5,748 units in May 2014. Although the Challenger trailed both of its rivals by a significant amount, May still marked one of the best months for the brawny Mopar muscle car since it was re-introduced in 2008. In fact, May 2014 was the Challenger’s second best month ever, trailing only March 2013 when 6,132 units were sold. Challenger sales are likely to see a spike somewhat similar to that of the Mustang with the introduction of the new 2015 models – but the big Mopar muscle car will almost certainly continue to rank third among the Detroit sports cars well into the foreseeable future.