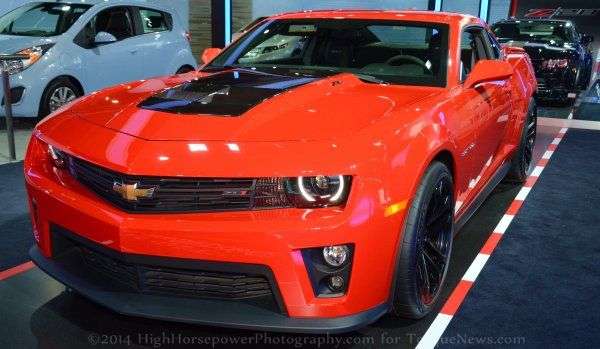 Last month, the Chevrolet Camaro moved more than 9,000 units for the first time since the first half of 2012 – allowing the Camaro to soundly pummel both the Ford Mustang and the Dodge Challenger in monthly sales while also giving the Camaro back the lead in annual muscle car sales for 2014.
Advertisement

After both the Ford Mustang and Chevrolet Camaro stumbled out of the starting gate in January 2014, the Mustang put together strong months in February and March to pull into the top spot in 2014 muscle car sales – although by only a narrow margin over the Chevrolet Camaro. However, General Motors turned the tables on Ford with the best month by the Camaro since June 2012, allowing the bowtie clad muscle car to jump back into the lead in the annual sales race as GM looks to win a stunning 5th straight performance car sales race in the US.

General Motors sold 9,043 examples of the Chevrolet Camaro in April 2014. This is the first time that the Camaro has topped the 9,000 unit mark since June 2012 when 9,123 units were sold and since that June, the best sales month for the Camaro came in August 2013 when 8,875 units were sold. Not only did April mark the best month for the Camaro in almost two full years, but it was also considerably higher than the 7,243 Mustangs sold by Ford Motor Company last month. Ford put up a monster month for Mustang sales in March – and I fully expected to see Mustang sales numbers remain strong – but that wasn’t the case as Ford saw sales drop by some 2,100 units from March to April. The Dodge Challenger posted a strong month (its best of the year), but as it always the case, the brawny Mopar muscle car came up well short of the crosstown rivals with just 5,122 units sold in April.

Worse yet for Ford, in a month where the Chevrolet Camaro saw sales growth of roughly 14% and the Dodge Challenger improved by 7% compared to the same month one year earlier, Ford watched Mustang sales slide by 7%. It should also be noted that the Chevrolet Corvette improved by a whopping 261% in April while the Nissan 370Z improved by 39%, the SRT Viper grew by 61% and the Subaru BRZ grew by 1%. In other words, in a month where the sports car segment was very clearly on the upswing with models that have been struggling like the 370Z and the Viper showing strong positive growth – the Mustang numbers dwindled.

Finally, the big month for the Camaro allowed Chevy to jump into the annual lead in muscle car sales by a margin of 28,611 to the Mustang’s 26,839. Dodge has sold 16,156 examples of the Challenger through the first 4 months of 2014.

Ford Motor Company likely expected to see a drop in sales while many prospective consumers held off for the arrival of the 2015 Mustang, but after the strong sales in March, this rocky April for the Mustang combined with a strong month for the Camaro comes as a painful shot in the arm. The Mustang will most certainly see a massive sales spike later this year when the 2015 models arrive in dealerships, but if the Camaro amasses a huge lead before then – it might be too much for the Mustang to overcome with a late year push. Should that be the case, the Camaro will lead US sports car sales for the 5th straight year…and that is something that FoMoCo would most certainly like to prevent.