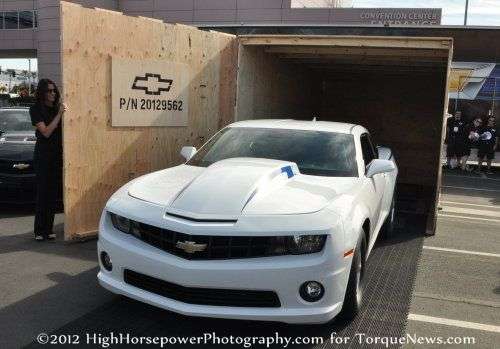 Camaro leads in sales, Challenger in growth for April 2012

The Chevrolet Camaro and Ford Mustang both posted curious year over year declines in sales but the Chevy muscle car moved enough units in April 2012 to beat the Mustang and the Dodge Challenger in the fourth month of the year – en route to what amounts to a fairly comfortable lead for the 2012 year as GM looks to lead the segment for a stunning third year in a row.
Advertisement

This is the time of year where sales of performance cars typically pick up – especially for models like the Chevrolet Camaro and Ford Mustang that have convertible options. However, through April 2012, the Camaro and Mustang both posted negative growth compared to the same month a year ago while the brawny Dodge Challenger posted a nice jump…although still well short of the other two American muscle cars in terms of sales volume.

The Chevrolet Camaro sold 9,627 coupes and convertibles in April 2012, accounting for an 11% drop from the 10,852 Camaros sold last April. The good news is that these 9,600+ units sold last month does represent a jump from the 9,292 units sold in March 2012 – making April the best month of the year thus far for the Camaro. In addition to besting the Mustang for April, making for the third monthly win in the segment out of the first three months of 2012, the Camaro has a comfortable lead in terms of annual sale. Chevrolet has sold 31,551 Camaro Coupes and Convertibles this year for a 2.4% increase over the first four months of 2011.

The Ford Mustang had one of its worst months of the year in April 2012 with just 7,801 examples of the fabled Ford pony car leaving dealerships last month. That figure is significantly lower than the 9k+ Mustangs sold in March 2012 or the 7,351 units sold in February that allowed Ford to prevent the Chevy shutout. On top of being one of the worst months of the 2012 year for the Mustang, the number of Mustangs sold in April 2012 accounts for a drop of almost 5% compared to the company moving almost 11,000 Mustangs in April 2011. Luckily, the Ford Mustang has still put together a fairly strong year in moving 27,934 Mustangs through the first four months – an increase of 18% compared to 2011. I suspect that things may improve for the Mustang in terms of sales over the next few months as the refreshed and more powerful 2013 Ford Mustang hits dealerships around the country. Click here for a look at our review of the 2013 Ford Mustang GT Premium Coupe.

The Dodge Challenger only moved 4,102 coupes last month (no convertible is available) so the Hemi and Pentastar powered Mopar muscle car sold far fewer models than the Mustang or Camaro but with a jump of 13%, the Challenger was the only one of the three American muscle cars to post a year over year improvement in April 2012. On the year, the Challenger is selling at a rate 9% better than last year with 14,626 units sold this year compared to just 13,359 sold during the first third of 2011.

Elon Musk Says Tesla To Offer Car Insurance in Texas Next Month, But These Challenges Exist
Tesla Co-Found Plans To Build a Battery Factory and Shift The Industry
END_OF_DOCUMENT_TOKEN_TO_BE_REPLACED