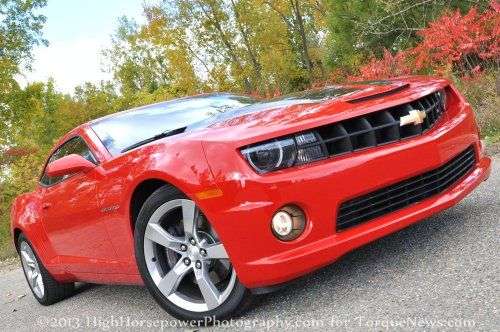 For the third time this year and the ninth time in the last fifteen months, the Chevrolet Camaro was the top dog in the American muscle car segment in March 2013 - outselling the Ford Mustang and the Dodge Challenger even though the Mustang had a strong March and the Challenger posted its best sales month ever.
Advertisement

The Chevrolet Camaro moved 8,102 coupes and convertibles in March 2013. While this represents a disappointing 12.8% drop in sales from the 9,292 Camaros sold in March last year, it is still enough to give the Camaro its third monthly sales title in as many months for 2013. On the year, Chevrolet has sold 19,198 copies of the Camaro – a drop of 12.4% from the 21,924 Camaros sold through the first three months of 2012. Fortunately for General Motors, sales are almost sure to improve later this year once the refreshed 2014 Chevy Camaro that debuted at the 2013 New York Auto Show hits showrooms around the country. The consumer market is always quick to respond well to a physical refresh so we would fully expect to see a spike in Camaro sales later this year in addition to any increased sales traffic caused by the introduction of the awesome new Camaro Z/28.

The Ford Mustang was second in muscle car sales with 7,688 coupes and convertibles sold in March, accounting for a 15% decline from the 9,046 Mustangs sold in March 2012. On the year, Ford has sold 17,320 Mustangs so not only is the Mustang almost 3,000 units behind where it was after the first quarter of 2012 but the original pony car is also 1,878 units behind the Camaro on the year. Luckily for Ford Motor Company, other than an unusually strong February in 2012, the mighty Mustang really didn’t hit its sales stride until the weather warmed up in May – at which point Ford posted some major sales figures with over 10,000 Mustangs sold in both May and June so there could be a bright future on Ford’s horizon. The tough part for Ford and their Mustang will be overcoming the Camaro sales spike brought about by the introduction of the 2014 Camaro.

Finally, the Dodge Challenger once again finished third in the segment in terms of monthly sales but for the second month in a row, the brawny Mopar muscle car posted record sales. The Dodge Challenger had never broken the barrier of 5,000 units sold in a single month but with 6,132 Challengers sold last month, the Hemi powered coupe beats its previous monthly sales record by some 1,200 units while besting sales figures from last March by a whopping 42%. For the first quarter of 2013, Dodge has sold 14,540 copies of the Challenger – an improvement of 38% compared to the first three months of 2012. Even though the Challenger continues to sit in the third spot among the Big 3 muscle cars, the Chrysler Group is surely elated over the boom in the sales figures of the roomy 2-door coupe. Also, Chrysler has to be just as excited that in an economic climate where the Camaro and Mustang – the US market’s bestselling sports cars for the last 40+ years – are posting a significant annual decline, the Challenger continues to grow even without any real changes during the course of the last two model years.

As we head into the warmer months for the northern US states, we can expect to see the sales figures of the Chevrolet Camaro, the Ford Mustang and the Dodge Challenger continue to improve. Should the Challenger be able to ride the warm weather sales wave, the brawny Mopar muscle car could continue to post record figures and that could – for the first time – allow the Challenger to surpass the Mustang and/or Camaro in monthly sales. That is, of course, if the Chevy and Ford muscle cars don’t see their own summer sales spike.