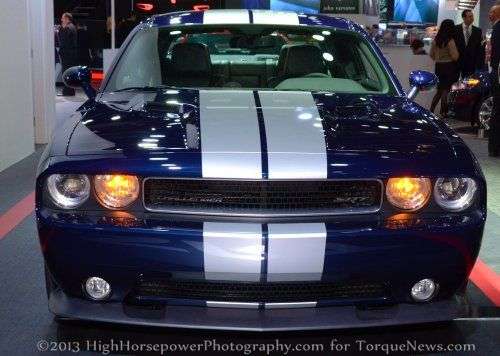 The Chevrolet Camaro did what it has done so frequently over the past three years in February 2013 - posting a high sales figure than the Ford Mustang and the Dodge Challenger – allowing GM’s muscle car to extend its lead over the cross town rivals as the Camaro works on its fourth straight annual sales title.
Advertisement

February generally isn’t a big month for high performance rear wheel drive sports cars and you would think that the harsh winter of 2013 would take its toll on the Chevrolet Camaro, the Ford Mustang and the Dodge Challenger but as we near spring – all three of the American muscle cars posted better sales than they had the month before. While February wasn’t great for the Camaro or the Mustang, the Challenger had one of the best months that it has had since being reintroduced for the 2008 model year. While we general use which ever muscle car won the monthly title for the image to accompany our muscle car sales topics, this month we have gone with the Challenger considering that it had such a great month in February 2013.

General Motors sold 6,171 examples of the Chevrolet Camaro coupe and convertible in February and while it was surely nice for the Camaro to beat the Mustang in monthly sales (while also extending the annual lead), February 2013 brought about a decline of 10.9% in sales compared to the same month last year. GM sold roughly 800 less Camaros in February 2013 than they did in February 2012 which, oddly, was about the same drop in units sold as the Camaro saw in January.

For the year, the Camaro is down 12.2% but it still holds a healthy early lead over the Mustang with 11,096 units sold to Ford’s 9,632 Mustangs sold so far this year. You have to question whether the slow Camaro sales could be caused buyers holding off to see how much the 2014 Chevrolet Corvette will be – and if the rumored low cost, non-Stingray Corvette is coming in the near future.

Ford Motor Company sold 6,024 Ford Mustang coupes and convertibles in February 2012, accounting for a drop of 18.1% compared to the same month last year. After a terrible sales month in January of only 3,608 units sold, the Mustang bounced back quickly in February but it wasn’t enough to show year over year growth – nor was it enough to beat the Camaro in monthly sales. Ford has sold just 9,632 Mustangs this year compared to over 11,000 sold in the first two months of 2012.

The Mustang is arguably better than ever while also offering a performance advantage over the Chevrolet Camaro so the dip in sales is hard to explain with the best theory being that buyers are waiting to see what Ford has to say about the upcoming next generation S550 Mustang expected to arrive in a little over a year now.

While the Dodge Challenger was once again the third place finisher in the American muscle car sales for February 2013, the Challenger was the only car on the list to show positive growth and the brawny Mopar muscle car did it in a very big way. With 4,911 examples of the Challenger sold last month, Dodge was able to boast a year over year growth rate of 34% - which is made all the more impressive by the fact that Ford and GM both posted large declines in sales in the same month where the Challenger boomed. The figure of 4,911 Challengers sold in February is the highest monthly sales figure posted by the modern Dodge Challenger.

Considering that February is traditionally one of the slower sales months for the Challenger, it will be interesting to see if the brawny Mopar muscle car can post more of these strong sales months throughout the 2013 calendar year.

While the Ford Mustang and Chevrolet Camaro are both down over the first two months of 2013, the Dodge Challenger is off to a great start and we can expect all three American muscle cars to continue to show stronger numbers as the weather in the northern states warms up.