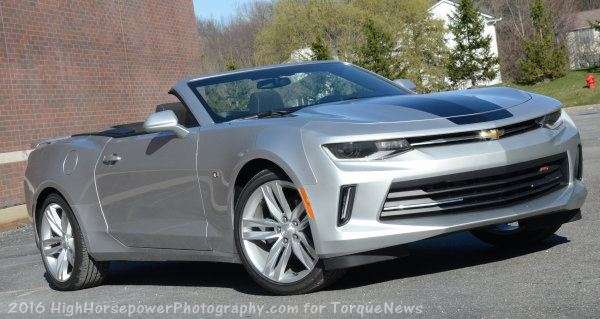 For the second month in a row, the Chevrolet Camaro outsold the Ford Mustang and the Dodge Challenger as sales across the muscle car segment hit their lowest total since October of 2014.
Advertisement

In October 2016, the combined total of the three cars in the American muscle car segment was the lowest it has been since October 2014 – the month before the then-new 2015 Dodge Challenger and 2015 Ford Mustang went on sale at full force. Since then, both the Mustang and the Challenger have enjoyed huge sales numbers and a handful of modern-day sales records, but in October 2016, both of those models saw the lowest sales numbers since their newest generations were introduced.

Meanwhile, the Chevrolet Camaro had one of its stronger months of the year, allowing GM to claim the title of the bestselling muscle car for the second month in a row.

Camaro Leads in October 2016
In October 2016, Chevrolet sold 6,277 examples of the Camaro, up roughly 19% from the 5,289 Camaros sold in the same month last year. October sales were down a touch from September, but last month still represented the 4th-best month of Camaro sales since the 6th generation was introduced late in 2015. Overall, Camaro sales are still far below where I had expected them to be when the new generation arrived, with the Chevy muscle car topping off at 7,457 units earlier this year.

The Ford Mustang settled for second place in the October 2016 muscle car sales race with 5,414 units sold. Last month was the worst month for the Mustang since October 2014 – which was the month before the new generation officially went on sale. Since then, Mustang sales have routinely been above the 8,000 mark with eight months of sales over 10,000 units, but over the past two months, Mustang sales have plummeted to their worst of the generation.

Finally, the Dodge Challenger sat in its familiar 3rd place in the muscle car segment with 4,127 units sold in October 2016. As is the case with the Mustang, last month was the worst month for Challenger sales since the new models hit back in late 2014, but the total of 4,127 Mopar muscle cars sold still easily outpaces the average numbers from the previous generation of the Challenger (up until 2014). The good news for Dodge is that with the Challenger T/A and Challenger T/A 392 headed to market very soon, we should see a bit of a spike in sales as buyers rush to snatch up the new high performance, low cost packages.

The Mustang Will Win the 2016 Title
With two months left in the 2016 calendar, the Ford Mustang sits in 1st place in the annual muscle car sales race, leading the Chevrolet Camaro by more than 30,000 units. GM has only sold more than 10,000 Camaros in a single month once during the modern era, and to catch what the Mustang has now – GM would need to average more than 16,000 Camaros per month to come close to Ford’s total. Really, Ford could stop selling Mustangs today and GM still wouldn’t be able to claim the muscle car title.

April wrote on November 3, 2016 - 9:37pm Permalink
Okay ready for the excuses why Camaro beat Mustang in sales (yes you steve and others lol)
Caelos wrote on December 2, 2016 - 11:30am Permalink
Oh.. April, April, did you see the numbers for November? The Camaro will always be second best to the ORIGINAL Pony car.
Mackey wrote on November 5, 2016 - 1:33pm Permalink
The Camaro is only a couple of huge fleet dumps to rental car companies from taking the sales crown from the Mustang in 2017.
Aarin wrote on November 8, 2016 - 2:46pm Permalink
I wondering is this has anything to do with the recent sightings of the 2018 updated Mustang being spotted. They did say the last time sales were this bad was before the next generation came out. Either way the Camaro has not had good months at all for being a new over hauled car. Only way it looks is, is the Mustang has to tank hard core for it to shine. 6277 Camaros sold is not all that great and it still struggles to put up stellar sales numbers for it being all new when not comparing it to anything. I'm suspect when Ford gets the updated '18 Mustang out with the 10spd possibly and mach 1 or bullit, It will once again crush it in sales. I guess we'll see.
Hotrodaz wrote on November 25, 2016 - 10:44pm Permalink
Yeah, the Camaro looks like the prior generations only worse and more expensive. If I were in the market, I'd wait for the 2018 stang for sure. If I had to pick one now, hands down the mustang is the more attractive car and I'd choose it and have fun with mods. The '68 Camaro was pretty cool but otherwise I've always liked the look of the mustang more. It's just the more American classic too. I did check out both of these cars and the mustang actually felt good to sit inside and the salesman was like yeah here is the Camaro, it's not that comfortable but here it is. Thought that was pretty sad for a salesman to even recognize the cars limits in front of a customer. I'm an avg car enthusiast here and I wish the mustang felt more powerful but that's where the mods come in. Hope that feeling improves for '18.