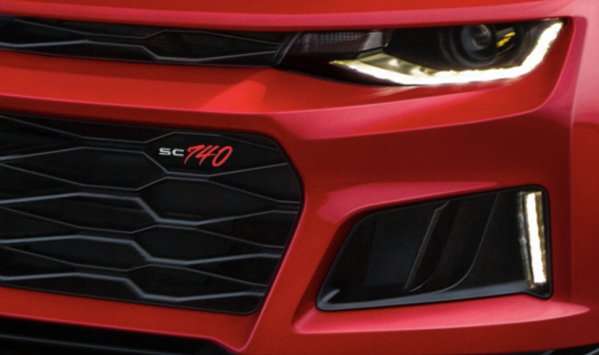 The high performance GM tuning experts at Callaway have rolled out their new SC740 package for the 2017 Chevrolet Camaro ZL1 – lifting the output to 740 horsepower for the special price of $16,995.
Advertisement

The 2017 Chevrolet Camaro ZL1 is currently reaching new owners around the United States, and with the supercharged LT4 V8 putting out 650 horsepower and 650lb-ft of torque, the 6th generation version of the ZL1 is the most powerful factory built, street legal Camaro of all time. The 2017 Camaro ZL1 comfortably beats the 580hp Camaro ZL1 from the previous generation and while some of the dealership-prepped high performance Camaros from the classic muscle car era might have packed far more than their advertised power – none offered 650 supercharged horsepower.

In short, the 2017 Chevrolet Camaro ZL1 is the baddest GM muscle car of all time, but it still falls shot on horsepower when compared to the Dodge Challenger SRT Hellcat. The Dodge has the same advertised torque rating of 650lb-ft, but the Challenger’s conservatively rated horsepower figure of 707 out-muscles the Camaro by a significant margin.

Fortunately, new Camaro ZL1 owners who want to have far more horsepower than the Hellcat Challenger can now turn to the high performance experts from Callaway to help their new muscle car make monster power.

The Callaway SC740 Camaro ZL1
This new high performance package for the 2017 Chevrolet Camaro ZL1 is called the Callaway SC740 package, because it is supercharged and it yields 740 horsepower. We learned that earlier this year when Callaway announced their plans to offer this package when the Camaro ZL1 began reaching dealerships, and with the first units being delivered around the country – the market for ZL1 performance parts is about the explode.

Callaway lifts the output of the Camaro ZL1 from 650 to 740 horsepower by removing the stock 1.7L supercharged and replacing it with a 2.3L supercharger, complete with an integrated intake manifold and a larger, more efficient intercooler. Finally, Callaway makes the most of those changes with a good engine tune that brings it up to the preliminary figure of 740 horsepower.

Callaway has yet to verify that it will make 740 horsepower, so there is a chance that it could make more horsepower – in which case it could be called something like the Camaro ZL1 SC750.

While we don’t know the final power figures for the Callaway Camaro ZL1 package, we do know the pricing. Starting now and running through January 3rd, this package has a price of $16,995. After the 3rd, the price of the package rises to $17,995, which when combined with the base MSRP of $62,135 leads to a total price of $80,130.

That is a big chunk of change, but for a deep-pocketed Camaro ZL1 owner who wants more power than pretty much any factory stock vehicle sold in the United States – the Callaway SC740 is one of the best options. Best of all, with that extra supercharged volume (1.7L to 2.3L), there is even more potential for higher power via continued tuning efforts beyond the SC740 package…so we could see a far more powerful Callaway Camaro ZL1 in the future.