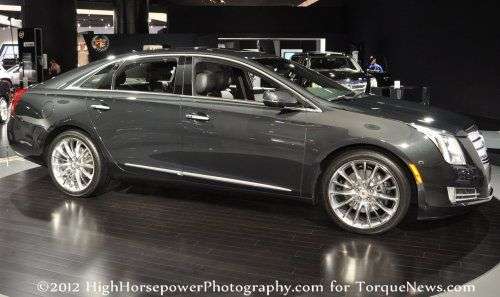 The Cadillac XTS to be built in China

General Motors has used the start of the 2012 Beijing Motor Show to introduce the new Cadillac XTS to the Chinese market and when production begins for the booming Chinese auto industry later this year, the high end Caddy sedans destined for sale in China will also be built in China.
Advertisement

The new Cadillac XTS will be built at General Motors’ Oshawa Ontario Assembly Plant for those vehicles built for the North American market but in cooperation with joint venture partner Shanghai General Motors (SGM), those premium Cadillac luxury sedans sold in China will be built locally. The XTS will be the second premium luxury sedan built in China for the local market; joining the Cadillac SLS Executive Sedan from 2006. That was an extended wheelbase version of the American SLS sport sedan but with the naturally long rear seating area of the XTS – the design could be a big hit in China in standard production form.

The Chinese auto industry is ripe with luxury car buyers and the industry as a whole loves big, roomy sedans…exactly what the new Cadillac XTS will offer when it arrives later this year. If the XTS is as popular in China as GM hopes, building the flagship luxury sedan in the Far East will help GM make more money while also helping to ensure that they can meet a boom in demand. Cadillac sold 30,000 vehicles in China during the 2011 calendar year which accounted for an impressive increase over just 17,000 units sold in 2010.

Cadillac currently sells the CTS sedan, the CTS coupe, the SRX and the Escalade in China with all of those vehicles built in North American and imported to the network of 68 dealers around China. The current bestseller for Cadillac in China is the SRX but with the interest in very large luxury cars, the XTS could quickly become Caddy’s top mover in the booming Chinese market. In addition to building the XTS in China, General Motors hopes to increase their dealership network to around 120 locations by the end of the 2012 calendar year in an effort to improve their availability and presence in the crucial Chinese auto industry. It could also help sell the XTS in China for GM to market the car as being built locally.

"China is the second-largest market for Cadillac, and of course is one of the largest and strongest markets in the world for luxury cars, so it is a core part of our vision as a brand. It is projected that by the end of the decade half of all luxury purchases in the world – all categories, not just cars – will occur in China,” said Don Butler, Cadillac vice president of marketing. “We're very encouraged by the positive response Chinese luxury consumers have to Cadillac. Qualities like innovation and entrepreneurship are admired by many luxury consumers in China, which aligns well with Cadillac. The American spirit of Cadillac creates a distinct and compelling position in the luxury marketplace."

The Cadillac XTS effectively replaces the STS and the DTS, offering sporty characters and impressive fuel economy figures in a roomy luxury sedan. The XTS will be fitted with every bit of cutting edge technology inside including power everything and a premium infotainment system, so the XTS could be a great fit for the Chinese market where high tech luxury is a major mover right now.

LG's New EV Battery Plant Is a Welcome News for Tesla
Tesla Giga Berlin's New Hurdle: It's Not Only the Gov't, but Now Tesla Itself
END_OF_DOCUMENT_TOKEN_TO_BE_REPLACED