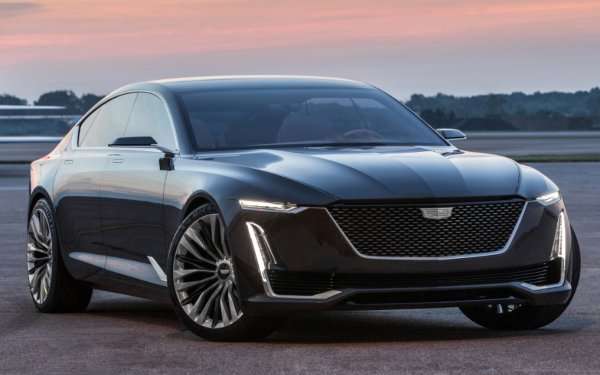 Cadillac Debuts a Stunning Sedan in Monterey – Not a Corvette Derivative

This past weekend, the new Cadillac Escala Concept Car was on display at the Pebble Beach Concours d’Elegance and while it isn’t the Corvette-based sports car that I many had hoped for – this is one gorgeous super sedan.
Advertisement

Last week, General Motors announced that the company would be debuting a new Cadillac concept car at the Pebble Beach Concours d’Elegance in California and while they didn’t offer much information, they did offer a vague sketch of the interior. Based on that image and some inside information that suggests that a Corvette-based Cadillac was on the way, I guessed that the automaker might be introducing a sports car concept in Monterey.

As it turns out, I was totally off the mark with that guess, as the Cadillac Escala debuted at the plush Cali automotive event in the form of a new range-topping sedan concept. It is practically the polar opposite of a Corvette-based sports car, but it is still a reason for Caddy fans to get excited.

Meet the Cadillac Escala Concept
The Cadillac Escala Concept is designed to serve as a range-topping accompaniment to the new Cadillac CT6, being a “larger and more elite” large sedan in the GM premium lineup. Basically, if the Escala was to come to production, it would be marketed to those folks who want a Cadillac which is bigger, more heavily appointed and likely far more expensive than the CT6. Also, based on the naming trend, it would be called something like the CT7 rather than Escala, but that is neither here nor there. Right now, this car isn’t about showcasing a future model so much as it is showing off new technologies that are coming down the pipeline to future Cadillac vehicles.

“Escala is a concept with two clear objectives. First, Escala is a statement of intent for the next iteration of the Cadillac design language, and also technical concepts in development for future Cadillac models. Secondly, Escala builds Cadillac’s aspirational character, signaling the brand’s return to the pinnacle of premium, said Johan de Nysschen, president of Global Cadillac. “Escala is a concept car, but one based upon the unrelenting rise of our product substance. Depending on the development of market segment for large luxury sedans, Escala is a potential addition to our existing product plan.”

The Cadillac Escala is 6 inches longer than the current CT6, with a high tech exterior that fits the bill of a super-premium luxury sedan. It is a beautiful car on the outside, but the interior of the Escala Concept is the main attraction.

The cabin of the Escala features a trio of curved Organic light emitting diode (OLED) screens which run across the dashboard. This screen setup works with voice control and driver gesture to adjust every aspect of the vehicle inside and out. This screen system and this high tech control interface are expected to come to the Cadillac market in the near future and with any luck, a production version of the Escala will arrive in the future as well.

Oh, by the way, while there are no engine specifications, we know that the Cadillac Escala Concept is powered by a prototype twin turbocharged 4.2L V8. This engine is said to be part of a future engine program that could most certainly lead to the next generation of big power GM vehicles.

Perhaps this twin turbocharged V8 will find its way into a Corvette-based Cadillac sports car – which my contacts insist is still in the works.