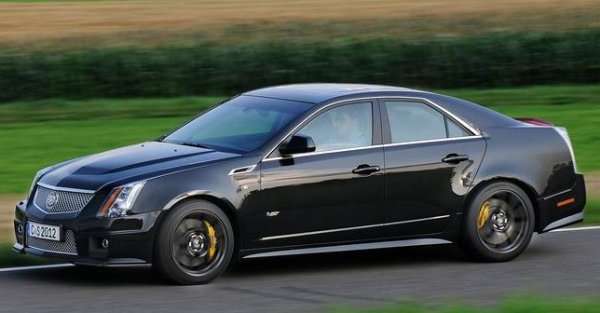 After a great deal of speculation, General Motors has confirmed that the new Cadillac CTS-V will indeed make its world debut at the 2015 Detroit Auto Show and while details on the new super-Caddy are limited to the debut location - there is a chance that the new CTS-V could derive its power from the same LT4 V8 as the 2015 Corvette Z06.
Advertisement

The 2015 North American International Auto Show in Detroit is shaping up to be a good one and after announcing earlier this year that the next generation Chevrolet Volt will make its grand debut in the Motor City, GM is giving performance fans something to look forward to with the arrival of the next generation Cadillac CTS-V. Unfortunately, little is known about the newest V Series model, but in looking at the CTS-V models of the past, we can make some guesses as to what we might see when the high performance lusuy sedan debuts in a few weeks.

The History of the CTS-V
The Cadillac CTS-V was first introduced with a goal of taking on the best performance sedans in the world and it did so with help from the C5 Corvette’s LS6 V8 and manual transmission. With 400 horsepower and 395lb-ft of torque, the 2004 CTS-V was able to compete with the best from Europe and when the LS2 from the base C6 Corvette was introduced for the 2006 model year, the slightly broader torque band improved performance, even though the LS2 offered the same 400 horsepower and 395lb-ft of torque.

The second generation Cadillac CTS-V was introduced for 2009 and in an effort to continue to compete with the worlds best, GM gave the V Series a big boost in performance. This came from the addition of the supercharged LSA V8, which was a variant of the LS9 V8 used in the C6 Corvette ZR1. The 2009-2014 packed 556 horsepower and 551lb-ft of torque which, like the previous generation , was sent to the rear wheels via a proper 6-speed manual transmission although the second generation also gave buyers the option of a 6-speed paddle shifted automatic transmission. When coupled with the high tech magnetic suspension setup and a monster Brembo brake package, the second generation CTS-V was a real beast - packing performance that allowed it to not only beat other luxury sedans, but a great many 2-door performance cars as well.

What to Expect from the Next CTS-V
The first generation Cadillac CTS-V relied on Corvette Z06 power and then base Corvette power while the second generation CTS-V relied on a version of the Corvette ZR1 engine. After the CTS-V used Corvette engines or variants of Corvette engines for the first two installments, I expect that the new super-Caddy will also derive its power from an engine that was first used in a Corvette. GM could use the LT1 engine, but with “only” 460 horsepower, it isn’t all that much more powerful than the twin turbocharged 3.6L V6 already offered in the non-V Series CTS. Packing the LT1 into the CTS-V wouldn’t pack the punch needed to stand out from the rest of the Cadillac lineup, nor would it allow the big Cadillac to really stand up to the likes of the Mercedes Benz AMG lineup or the BMW M5.

However, General Motors has an engine in their arsenal that would allow the new Cadillac CTS-V to compete with pretty much anything on the road today and that engine is the supercharged LT4 from the 2015 Corvette Z06. Were GM to equip the CTS-V with the LT4, 650 horsepower and 650lb-ft of torque would make it one of the most powerful sedan in the world and even a slightly watered down version of the LT4 (similar to what GM did with the LS9 and the LSA) would make the new Caddy one wicked luxury performance sedan - one that would give BMW and AMG owners nightmares.

In addition to a monster supercharged engine, I expect that the new Cadillac CTS-V will feature a premium brake package, the newest version of GM magnetic suspension setup and the two transmissions from the Corvette lineup (7-speed manual, 8-speed auto). Should my expectations be accurate, this new CTS-V will be just as much of a beast in the performance sedan segment as the previous two generations.

The 2015 Detroit Auto Show opens in early January so within the next few weeks, we will have a complete picture of the next generation of Cadillac high performance. I am excited and if you love fast cars - you should be too,

Jason wrote on December 16, 2014 - 6:48pm Permalink
Lincoln needs a 5.2-liter V8-powered, 650-plus-hp, all-wheel-drive super-MKZ to compete with this.
The General wrote on December 21, 2014 - 12:34pm Permalink
Put in the full power LT4 no need to protect the corvette "image" It weighs much less and already has a huge performance advantage. Hell the Hellcat is more powerful than the Viper. Don't screw around GM and maybe even give it a bigger Supercharger with 710 HP!

LG's New EV Battery Plant Is a Welcome News for Tesla
Tesla Giga Berlin's New Hurdle: It's Not Only the Gov't, but Now Tesla Itself
END_OF_DOCUMENT_TOKEN_TO_BE_REPLACED