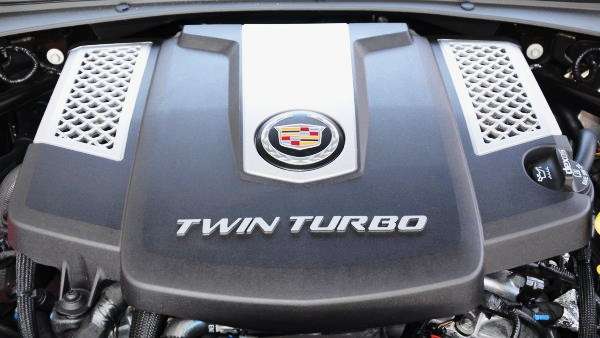 Those folks who have been eagerly awaiting the Cadillac ATS-V or CTS-V before making their next new luxury sport sedan purchase will only have to wait until this fall, as the high performance ATS-V is expected to debut in November in LA followed by the debut of the CTS-V in Detroit next January.
Advertisement

We learned a few weeks back that the next generation Cadillac CTS-V is expected to debut at the 2015 North American International Auto Show in Detroit in January and according to the folks at Car and Driver, the smaller yet similarly high performance ATS-V will debut before that, in November at the LA Auto Show.

Big Auto Show Season for GM
Provided that all of these reports are accurate, the major auto show circuit this winter and into next spring should be a big one for General Motors. It looks as though the 2015 Cadillac ATS-V will be unveiled in LA in late November and if that is the case, the first units are likely to arrive shortly after. The 2016 Cadillac CTS-V should follow in mid January at the Detroit auto show, but it isnt likely to reach showrooms until the fall of 2015. The next generation Chevrolet Volt will also debut at the 2015 Detroit show and rumors suggest that the 2016 Chevrolet Camaro will also debut in the Motor City. Finally, the new super premium large luxury sedan from Cadillac – possibly named the LTS – will debut at the 2015 New York Auto Show in April, with the new big sedan arriving in dealerships by the end of the year.

Expectations for the ATS-V and CTS-V
General Motors has been unfortunately tight lipped about the next generation of the Cadillac CTS-V and the all new ATS-V, but there have been plenty of rumors as to what will power these beastly luxury sport sedans when they arrive.

Click here for a look at my review of the Cadillac ATS 2.5 Luxury.

The 2015 Cadillac ATS-V will most likely be powered by the twin turbocharged 3.6L V6 that is currently found in the Cadillac CTS VSport. This engine sends 420 horsepower and 430lb-ft of torque to the rear wheels, making the bigger CTS a total blast to drive. When you consider the fact that the current ATS sedan with the naturally aspirated 3.6L V6 in rear wheel drive forms weighs just 3,461 pounds, even after you add the additional weight of the turbocharging components, the ATS-V should weigh quite a bit less than the CTS VSport which weighs 4,026 pounds. The CTS VSport Premium weighs 181lbs more than the naturally aspirated CTS Premium so if Cadillac keeps the added weight of the ATS-V similar to that of the CTS VSport – the high performance compact luxury sedan could weigh as little as 3,642 pounds.

Click here for a look at my review of the Cadillac CTS VSport.

The 2016 Cadillac CTS-V is expected to pack the same supercharged LT4 V8 as the 2015 Chevrolet Corvette Z06. In the past, the supercharged Cadillac performance models have used a slightly different engine than the supercharged Corvette, so the CTS-V might have a version of the LT4 with its own name – along with a lower power rating than the Z06. The new high end Corvette packs 650 horsepower and 650lb-ft of torque, but I would expect the CTS-V to be somewhere in the 600-625hp range. It will likely be heavier than the previous CTS-V, but it should also be a whole lot more powerful.

Again, these expected debuts are based on rumors, but these possible debut dates make good sense and when official debut information arrives – you will find it here on TorqueNews.com.