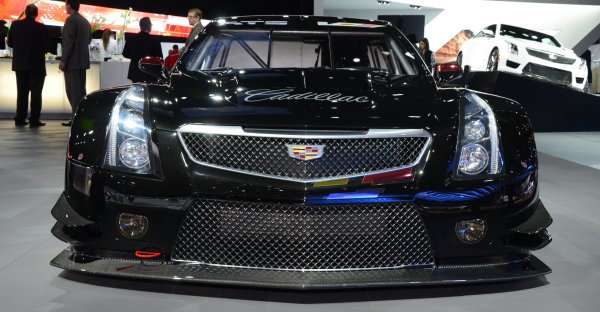 Cadillac ATS-V Could Get the Camaro Z28 LS7

While the new Cadillac ATS-V is an awesome compact performance sedan with a twin turbo V6 putting out 464hp and 445tq, Motor Trend has reported that General Motors is working on an even higher performance ATS-V that will pack the LS7 V8 that currently motivates the Chevrolet Camaro Z28.
Advertisement

The Cadillac ATS is unquestionably the best of the modern compact Cadillacs, so when General Motors announced that they were working on an ATS-V, we were pretty excited. We were even more excited when it was announced that the ATS-V would be powered by a specially tuned 3.6L twin turbo V6 that delivers 464 horsepower and 445lb-ft of torque, which will allow it to compete with the best small luxury performance models sold in the world.

However, it seems that General Motors wants to make an even bigger splash in the compact luxury sport performance world, as Motor Trend reported that the automaker is working on a Cadillac ATS-V+ that will be powered by the same 7.0L LS7 V8 that is currently found in the Chevrolet Camaro Z28.

The LS7 ATS-V
For those who are unfamiliar with the 7.0L LS7 V8, it was initially used in the C6 Chevrolet Corvette Z06 before being offered in the Chevrolet Camaro Z28. This high revving, large displacement, naturally aspirated V8 delivers 505 horsepower and 480lb-ft of torque while the lightweight nature of the LS7 is ideal for a road-handling machine, as it allows for easier weight balance between the front and rear end of the car. Even if the LS7 was not modified from Camaro Z28 use, those power figures would make the ATS-V+ quite a bit more powerful than the “normal” ATS-V, but that power gain would come with the high revving attributes which are ideal for road racing and the LS7 might weight less than the twin turbo V6 when you consider all of the components of both engines.

The Cadillac ATS-V+ would have the LS7 engine mated to the buyer’s choice of either the 7-speed manual or the 8-speed automatic transmission from the current C7 Corvette Z06. Also, while Motor Trend doesn’t mention any other aspects of this car, I would expect to see other higher end components such as a revamped braking package and a specially tuned suspension setup based around the Magnetic Ride Control system.

Why the LS7?
There are undoubtedly more than a few people wondering why General Motors would call on the relatively old LS7 engine to power a new super-premium performance package for the Cadillac ATS-V. Well, first of all, the LS7 is just plain awesome. It was engineered for a mix of road use and track use, so it has both components and features that can withstand the abuse of track time without compromising the ability to be driven every day. The LS7 was also designed with weight reduction in mind, so as 505 horsepower V8 engines go, this engine is very light and while I don’t know the weight of the twin turbo V6, I expect that the LS7 could be very similar – if not lighter. More importantly, the LS7 engine is designed to reach high engine RPMs for long periods of time, so if GM wants to create a street-friendly ATS-V that will totally dominate the luxury sport segment, the LS7 seems like the logical choice.

Some people had hoped that a hotter ATS-V would get the 650 horsepower LT4 from the new Corvette Z06, but that engine is heavy and that added weight would have a big impact over the front wheels of the compact ATS-V. I would imagine that GM has something to replace the LS7 in the works, but with the LS7 still being produced for the Camaro Z28, GM could create a luxury sport track beast with this 7.0L V8.