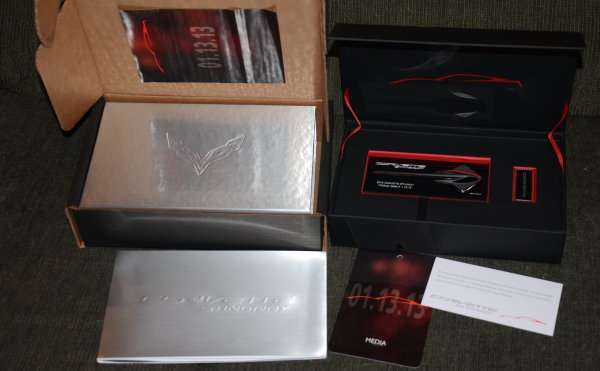 One of the media packages from the debut of the 2014 Chevrolet Corvette Stingray has arrived on eBay as part of a fundraising campaign for a Hartford area elementary school, giving Corvette enthusiasts a chance to own an extremely rare piece of Corvette history.
Advertisement

When the 2014 Chevrolet Corvette Stingray was introduced on the night before the 2013 Detroit Auto Show, only around 2,000 members of the media were admitted to the historic event. Each of the media members in attendance received a media kit, which contains a USB drive with press release information and a chrome C7 Stingray badge mounted on a small plaque. Each of these plaques were numbered and only 2014 were made.

These media kits for the 2014 Corvette hit eBay the next day and the few which were put up for sale demanded big money. General Motors even listed one on eBay with a collection of autographs and that unique piece sold for over $4,000. However, those few media kits posted online for sale were quickly snatched up, leaving Corvette fans powerless in an attempt to acquire these rare pieces of Corvette history.

Well, those Corvette fans and collectors who want to get their hands on one of the 2014 C7 Stingray media kits are in luck, as one of them has landed on eBay and as this piece goes live, the bidding is at a surprisingly low $155.

The C7 Corvette Media Kit
I was fortunate enough to attend the launch of the C7 Corvette Stingray and I received one of these media kits. Inside of the black box shown is a bright silver slip shell over another, more decorative black box, both of which sport the Stingray logo. Inside of the smaller, decorative black box is the plaque with the Stingray logo and the serial number along with the flash drive. There is also a bright silver booklet with the media kit information printed in high resolution.

Again, the kit shown above is my own C7 Corvette media kit and the one for sale on eBay right now is unopened, but it will have the same goodies inside as my kit shown above.

A Piece Donated for Charity
In the past year or so, a few other outlets have voiced their displeasure with members of the media selling their media kits, but it should be pointed out that this kit was donated by General Motors for the purpose of fundraising. The proceeds of this auction are part of a campaign to help raise money for a West Hartford school's trip to Michigan State University for the Odyssey of the Mind world championships.

In other words, in buying the 2014 Chevrolet Corvette Stingray world debut media kit on eBay, you are both getting yourself a rare piece of Corvette memorabilia and you are supporting children competing in a global academic competition.

Click here for a closer look at the 2014 Chevrolet Corvette Stingray media kit on eBay!