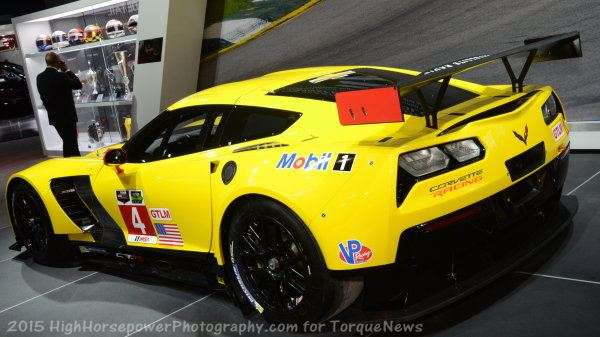 The Chevrolet Camaro had a fairly slow month in March 2015, but just when it looked like the popularity of the new C7 Corvette had started to fade, the new Stingray and Z06 posted the second best sales month of the generation – trailing only the very first month that the C7 was available and beating the Porsche lineup by a massive margin.
Advertisement

When the C7 Chevrolet Corvette Stingray first hit dealerships back in October of 2013, it was an instant success. Even though there were some skeptics who questioned the angular taillights, the C7 Stingray was well received by the media and very well received by the public, quickly becoming the bestselling premium sports car sold in America. The Corvette has spent the past 18 months as the 4th most popular sporty car in the US, trailing only the Camaro, the Ford Mustang and the Dodge Challenger.

However, sales began to dip as we got into the colder months of 2014 and after a very strong December, Corvette sales were once again slow in January and February 2015. This raised the question of whether the high demand for the Corvette had begun to fade, but a big bounce back in March shows that the C7 Corvette is just as popular today as it was back in October 2013.

Corvette March Sales Boom
In March 2015 the weather began to warm up around the country and that led to a spike in sporty car sales, with the Chevrolet Corvette benefitting in a big way. After posting a record low in January and sluggish numbers in February, the C7 rebounded in March with 3,785 units sold. This is a 10% improvement over the same month last year and since the first month that the new C7 Corvette was on sale, no month has been close to March 2015.

Best of all for GM and their fans, sales of the C7 Corvette are likely to grow more as we get into the summer, we could see record sales numbers for the modern generation Stingray and Z06.

Corvette Doubles Up Porsche Cars
The key competitor in the US market for the Chevrolet Corvette Stingray and Z06 is the family of Porsche high performance luxury cars, but since the C7 was introduced, it really hasn’t been much of a competition. The Corvette has routinely outsold every Porsche car combined, and that didn’t change in March. In fact, with the 911/918 moving 846 units, the Boxster/Cayman moving 468 units and the Panamera moving 433 units, Porsche sold just 1,747 cars last month – way less than half of the number of Corvettes sold during the same period.

If you figure that there were 26 days in March where your local Chevrolet dealership was open for business, there were 146 Corvettes sold throughout the US each day last month. This means that by the end of the second week of March, Chevrolet sold more Corvettes than Porsche sold cars throughout the entire month.

This healthy beating makes the Corvette the clear frontrunner in the American premium sports car market once again, while also making it very clear that interest in the C7 hasn’t faded any.