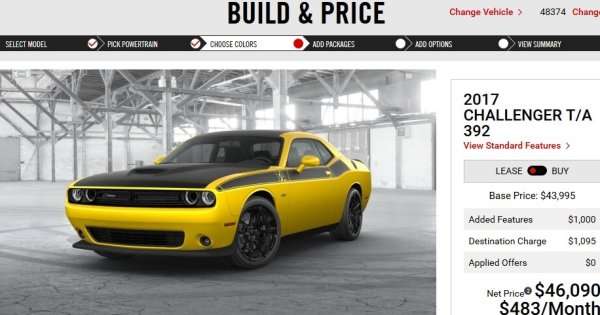 The information for the 2017 Dodge Challenger lineup has gone live in Dodge.com with a whopping 13 trimlines, but more importantly, those prospective buyers hoping to score a new Challenger T/A can now build and price their new Mopar muscle car – with either the 5.7L or 6.4L Hemi.
Advertisement

With only a few days left in the 2016 calendar year, most automakers switched their website listings from 2016 to 2017 months ago, but on Dodge.com, the 2016 Challenger is still the default choice. The 2017 information is available, but you have to click around for it and because of that, some people haven’t been able to find the detailed pricing for the new Challenger T/A.

We discussed the basic pricing back when the 2017 Dodge Challenger T/A, T/A Plus and T/A 392 debuted back in August, but with the arrival of the 2017 information on Dodge.com – we can now build and price each of the new T/A models.

Build and Price the 2017 Dodge Challenger T/A
First up, we have the new 2017 Dodge Challenger T/A, which is based on the Challenger R/T with the 5.7L Hemi and which has a starting price of $38,485 including the $1,095 destination charge. This package comes with cloth seats and a 6-speed manual transmission for that price, but the 8-speed automatic can be added for $1,400 and if you want more safety technology or a better sound system – the Challenger T/A has a Driver Convenience Group package for $1,295 and a Sound Group package for $795. The Driver Convenience Group adds blind spot monitoring, HID headlights, the ParkSense rear parking assist system, power electronic exterior mirrors and remote start while the Sound Group adds a 276 watt amplifier and a 6 “premium” speakers.

If you build a 2017 Challenger T/A, picking Redline Re Tricoat exterior paint (the only upcharge paint) and adding all of the options mentioned above, the price sits at $44,730.

Building the 2017 Challenger T/A Plus
Next up we have the 2017 Dodge Challenger T/A Plus, which builds on the Challenger T/A, adding leather seats, a premium UConnect infotainment system, a leather wrapped performance steering wheel and a 6-speaker premium sound system. The T/A Plus package comes with more option packages, including the Driver Convenience Group ($1,095), Sound Group II ($895), the Harman Kardon Sound Group ($1,595) and the Technology Group ($395). The Driver Convenience Group is similar to that from the T/A and as you might imagine, the Sound Group II and Harman Kardon packages add varying levels of improved speakers. The Technology Group adds automatic high beams, rain sensing wipers and adaptive speed control.

Finally, the 2017 Challenger T/A Plus has the same standalone options as the T/A models, including the hood pins, the performance brake pads, the car cover and the sunroof, along with Redline Red being the only exterior color with an upcharge.

The T/A Plus pricing starts at $41,235 (with destination), but if you load it up with the automatic transmission, Redline Red paint, Driver Convenience, Harman Kardon Sound, the Technology Group, the brake pads, the hood pins, the car cover and the sunroof, the price rises to $49,275.

The Baddest 2017 Challenger T/A with 392 Power
Last, but most certainly not least, we have the 2017 Dodge Challenger T/A 392. This model is based on the Challenger R/T Scat Pack, so it comes with the 485 horsepower 6.4L Hemi, sport suspension, higher performance brakes from the Hellcat models, lightweight wheels and unique aero bits (many of which were borrowed from the SRT or Hellcat models).

The Challenger T/A 392 package includes the same $1,400 automatic transmission upgrade and the same exterior paint options as the other models, along with the same popular equipment packaged from the Challenger T/A Plus. This includes the Driver Convenience Group, Sound Group II, the Harman Kardon Group and the Technology Group, but the T/A 392 also has a Leather Interior Group package with – for $1,695 – adds leather seats and other leather trim throughout the cabin.

The 2017 Dodge Challenger T/A 392 starts at $46,090, but if you add the automatic transmission, Redline Red paint, all of the popular equipment groups and the standalone options, the loaded price sits at $54,530. Considering that a loaded Challenger SRT 392 prices out to $54,675, it seems to me that the Challenger T/A 392 is geared more towards those folks who are focused more on performance – or someone who wants a 485hp muscle car with the awesome exterior design of the new Challenger T/A.