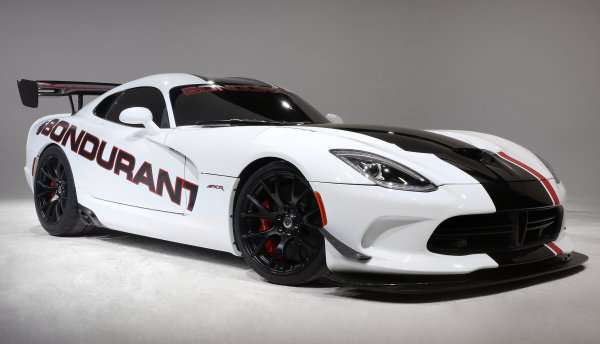 Bob Bondurant’s school of high performance driving has made a major announcement, switching to the Dodge Viper, Challenger and Charger from the Chevrolet Corvette and Camaro fleet that the Arizona-based driving school has been known for over the past decade.
Advertisement

The introduction of the Dodge Viper, Challenger and Charger to the Bondurant racing program isn’t just limited to the 3-day track sessions normally offered. Those folks who buy or lease an SRT vehicle will get a free one day session at Bondurant, bringing even more value and training capabilities to the SRT track day program.

School President Pat Bondurant explained how the swap from GM to Mopar came about:
“Bob and I actually met at the car auction Russo & Steele when I was selling my RT10 Viper! Bob recently saw Jay Leno at Pebble Beach and got a nudge from old race teammate, comedian Tim Allen. The crazy excitement they felt when they drove the Dodge Hellcat caught Bob’s attention. Bob was itching to track test the Dodge Challenger SRT, Viper TA 2.0 and finally the Hellcat ride was the real game changer when he said ‘Sweetheart this is exactly what I have been looking for to keep my own thrill in the game.’”

So it sounds like Jay Leno and Tim Allen had a hand in the Bondurant school swapping from Corvette and Camaro to the Viper, Challenger and Charger.

The Bondurant Method Experience with Dodge
While the Bondurant school has a variety of packages starting with a one-day program in the Dodge Challenger SRT 392 or the Dodge Viper TA 2.0, the four-day program offers students the most elaborate spread of high performance Mopar vehicles.

The 4-day program begins on day one with the Dodge Challenger SRT 392 and after a day of on-track learning with Bondurant’s team of championship drivers-turned-race instructors, you move onto day two with the Dodge Viper TA 2.0. After spending day two in the Viper TA, the driving instructors decide whether or not you have the skills to move onto the Dodge Viper American Club Racer (ACR). If you get the thumbs up, you will spend day three in the Viper ACR, a car which has already set 13 track records around the United States. If you don’t get approved for the Viper ACR, you spend day three in the Viper TA 2.0 – which really isn’t all that bad.

Finally, on day four, students can pick from any of the Dodge vehicles for an open track day, with the Bondurant team assisting drivers with their SCCA racing licenses.

The Dodge programs officially begin in January, so those interested in attending can contact Bondurant for more information on pricing and scheduling.