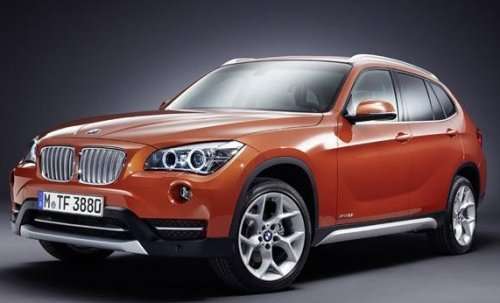 After months of rumors and speculation, BMW has announced that the 2013 X1 will go on sale this fall in the US – marking the introduction of the compact sport utility vehicle for the North American market with a low price of just $31,545 (including destination charges of $895).
Advertisement

When the 2013 BMW X1 arrives in US dealerships this fall, it will be available in three trimlines – sDrive 28i, xDrive 28i and the xDrive 35i – with a pair of turbocharged engines providing the thrust across the model lineup. The BMW X1 sDrive 28i and xDrive 28i are powered by a 2.0L 4-cylinder engine featuring BMW’s TwinPower Turbo design, using a twin scroll turbocharger and direct injection to make 240 horsepower. The difference between the two X1 28i models is that the sDrive 28i is a rear wheel drive package while the BMW X1 xDrive 28i features the German automaker’s advanced all wheel drive system with electronically controlled power distribution. The X1 sDrive 28i is equipped with auto start-stop technology to help improve fuel economy, whether it is a rear or all wheel drive model.

In addition to packing impressive power and fuel economy, the BMW engineers have tuned the suspension and drive systems (be it rear or all wheel) to offer great traction under acceleration in all sorts of road and whether conditions. BMW also promises that the X1 will offer great handling when driving “dynamically through corners” – so it sounds like the new BMW X1 will offer handling worthy of a modern German luxury SUV.

Also, the 2013 BMW X1 lineup features a fresh new look that allows it to fit smoothly into the current brand lineup in the US with the large grille openings, stretch headlights and long hood area. Along the bottom of the front end, there are enhanced openings for better cooling without hurting aerodynamics with silver painted trim up front, continuing down the lower portion of the sides of the new X1. Inside, the 2013 BMW X1 offers typical BMW level luxury with a revised center console for the North American market and lots of chrome/satin silver accents throughout the cabin.

The massive popularity of compact sport utility vehicles in the US market (like the Ford Escape) could spell great things for the 2013 BMW X1 in North America. On top of the popularity of the segment and the general lack of efficient compact SUVs in the US, the new BMW X1 could be a huge hit with a price starting just over $31,000. Finally (and perhaps most importantly), the low price of the new X1 makes this compact SUV among the lowest priced BMW models available in the US and based on size – the X1 is pound for pound the least expensive BMW in the US. With room for four passengers and cargo space to spare, the 4-door X1 is roughly $3,000 cheaper than the entry level BMW 3 Series sedan. This low price could entice buyers who need something larger than the BMW 1 Series Coupe, but don’t want to pay $35k for a 3 Series Sedan. Even when fitted with the advanced BMW all wheel drive system, the 2013 X1 xDrive 28i is still less expensive than the least expensive 3 Series sedans.

BMW quality and luxury with a fuel efficient engine, room for four adults and all wheel drive…it sure sounds like a winner on paper. We will know just how successful the new BMW X1 is when it hits US shores this fall.

Anonymous wrote on April 3, 2012 - 5:15pm Permalink
No DIESEL!!!??? HUGE disappointment. Earlier rumors had pegged the 2.0d as the baseline motor for USA markets. Reconsider it, BMW, or I'll never consider one.
Anonymous wrote on April 5, 2012 - 8:33am Permalink
I too am disappointed with the lack of a diesel offering. I've been patiently waiting based on trade speculation that it would be coming this fall. Now, I shall have to look elsewhere.
Anonymous wrote on August 28, 2012 - 4:12pm Permalink
I am bummed as well. I was waiting for the diesel. I guess I am back to the jetta Sport Wagen or Audi Q3 possibly... Sorry BMW, another lost sale here in the USA...