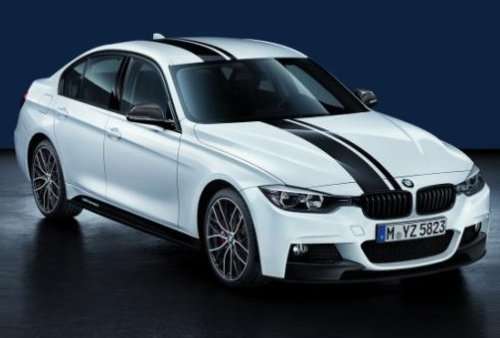 The folks at BMW’s M Performance Parts division have just announced a spread of new high performance goodies for the 2012 BMW 3 Series and the 2011-2012 BMW 5 Series – including wheels, brakes, body parts, interior components and an exhaust system that can help make your new Bimmer sportier looking while also boosting performance.
Advertisement

While the recent announcement of new M Performance Parts for the 2012 BMW 3 Series and the 2011-2012 BMW 5 Series pertain to both vehicles; the new 3 Series gets the majority of the attention in this list of new performance components.

First of all, the BMW M Performance division has added a new set of forged 20” aluminum wheels that are constructed using a special forging process that allows these slender spoke wheels to weigh 2.4 pounds less than a similar wheel using a standard construction. Lighter wheels allow for more power to the ground, improved acceleration and improving handling with less weight at each corner. The new M wheels for the 2012 3 Series and 2011-2012 5 Series feature an alternating color design with high gloss black and “Ferric grey” paint so a striking, sporty look. These new wheels, which are available for both the 3 and 5 Series sedans, are the largest wheel and tire combination officially approved by BMW.

Next, the M Performance group has added a new Brembo big brake package for the 2012 BMW 3 Series and the 2011-2012 BMW 5 Series sedans. This package adds 4-piston calipers up front with lightweight cross drilled / slotted brake rotors measuring 14.5 inches while the back stoppers feature 2-piston calipers and 13.5” drilled /slotted rotors – all of which are clamped down on by high friction brake pads. Those who opt for the new M Performance Brembo brake package can select from red, yellow or orange calipers for an extra measure of customization.

There are a variety of exterior dress-up items available for the 2012 BMW 3 Series and 2011-2012 BMW 5 Series thanks to the M Performance division. This begins with a set of high gloss kidney grille inserts and carbon fiber mirror caps for both German sport sedans. 2012 3 Series owners can also add a set of PVC film stripes (shown in the image on the right) that is offset to the passenger side – available in either black or white. Owners of the 2011 and 2012 BMW 5 Series sedan can now add an M Performance designed carbon fiber deck lid spoiler; adding to the attitude and aerodynamics of the 5 Series sedan.

Inside, the new M Performance division items include a new trim package that adds lots of carbon fiber and Alcantara trim throughout. The carbon fiber trim features an open pore matte finish, proving a nice contrast to the high gloss trim typically found in the standard 2012 BMW 3 Series that includes trim on the dash and the shift knob; whether it is a manual or automatic transmission. The new 3 Series sedan also offers a new race inspired steering wheel with a flat bottom, angled sides and integrated grips along the top – all of which are trimmed in black Alcantara. There is also a red stripe in the top-middle of the M steering wheel for a point of reference while driving.

Tsingshan's Threat to Tesla: EV Maker Is In Battery Crosshairs
Tesla-Funded Research Reveals One of The Biggest Mysteries of EV Battery
END_OF_DOCUMENT_TOKEN_TO_BE_REPLACED