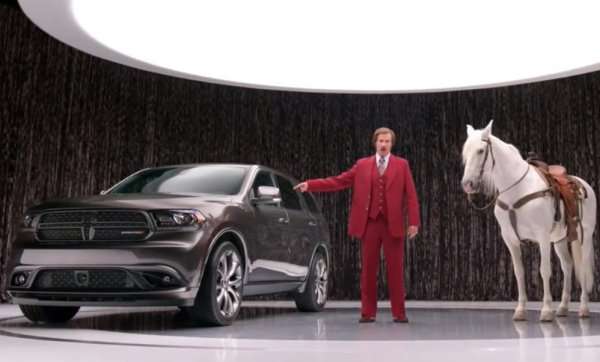 The Chrysler Group has teamed up with Saturday Night Live funnyman Will Ferrell to promote the new 2014 Dodge Durango in a series of new videos – with some help of Ferrell’s character Ron Burgundy from the Anchorman movie series.
Advertisement

The automotive industry is rich with celebrity endorsements but most of those famous folks who serve as the spokesperson for a new vehicle do so as themselves but for the new 2014 Dodge Durango advertising campaign, Will Ferrell appears as his character Ron Burgundy from the Anchorman movies. Of course, these new Durango videos feature Ron Burgundy’s distinct matter of fact sense of humor to focus on the horsepower, the fuel economy and – oddly – the glove box. The glove box is actually the focal point of two different videos which serve as more of a humorous attention-getter than the traditional automotive advertisement that focuses on key features or aspects of the vehicle in question.

Aside from the two glove box-centric commercials, the other 2014 Dodge Durango spots featuring Will Ferrell as Ron Burgundy focus on far more traditional aspects of the vehicle. The first looks at why the new Durango is 360 times better than a horse based on the power output of the two while the second proclaims the excellent fuel economy of the roomy Dodge sport utility vehicle as Burgundy struggles to understand “25 MPGs”.

"The Dodge brand's irreverent tone and attitude make Ron Burgundy the perfect pitchman for the new 2014 Dodge Durango," said Olivier François, Chief Marketing Officer of Chrysler Group LLC. “By joining forces with Paramount Pictures, ‘Anchorman 2: The Legend Continues’ and Will Ferrell, we’re able to show the new 2014 Dodge Durango and its cutting edge technology in a completely unexpected approach that is fresh, funny and culturally provocative to our audiences.”

The Dodge YouTube Durango page that displays these four commercials also has Ron Burgundy’s glamour shot over a very “six o’clock news” backdrop asking if you would buy a Durango now with a yes button and a no button. The yes button leads you to the Durango page of the Dodge.com website while the no button leads to some humorous frustration. We have included the videos for your viewing pleasure below and those interesting in a getting a closer look at some still shots of the 2014 Durango can check those out here.

"Ron Burgundy as the new Dodge Durango spokesperson brings together two iconic American legends,” said Josh Greenstein, CMO of Paramount Pictures. "This campaign was an unprecedented opportunity to collaborate with our filmmakers to create new original content and distribute it worldwide in advance of the long awaited ‘Anchorman’ sequel release this December. With the personal involvement of Will Ferrell, our writer / director Adam McKay, the comedy team at Funny or Die, and the Dodge creative team at Wieden+Kennedy, we were able to create a truly epic partnership.”

Of course, this new advertising campaign is designed to also benefit Will Ferrell as the new Anchorman 2 featuring Ferrell’s depiction of the fictional news reporter Ron Burgundy is due out in late December so as Burgundy is able to advertise the 2014 Durango with a touch of humor, this series of new Dodge commercials will bring attention to the upcoming debut of Anchorman 2 while maybe attracting some Dodge fans to see the movie after the anchorman himself helps to promote the sexy, sporty new Dodge Durango. Joining these four videos will be 30 and 60 second version of another clip that will debut tonight during Dancing with the Stars. Once that spot debuts on TV, we can also expect to see it included on the Dodge YouTube page.