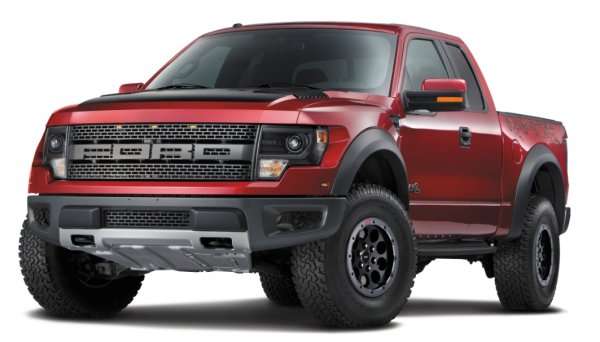 There are a great many rumors as to what will debut at the 2015 Detroit Auto Show, but the newest rumor suggests that a new SVT Raptor based on the aluminum bodied 2015 Ford F150 will be among the high performance premiers in the Motor City come January.
Advertisement

While details are very limited – like limited to pretty much nothing – the folks at Road & Track have sources that have stated that the newest Ford SVT Raptor F150 will make its debut at the 2015 North American International Auto Show in Detroit. That isn’t official nor have the sources offered any idea as to what we can expect from the new F150 Raptor, but it goes without saying that the performance truck world will be eagerly watching the news from Detroit in January with the hopes of seeing the next high performance SVT pickup.

The Next Gen F150 Raptor
Since we don’t have any details or even any rumors as to what we might see from the next generation Ford SVT Raptor F150, we can use the current Raptor to guess what could be coming for the next generation of the off-road ready SVT pickup. Of course, it will be based on the 2015 F150, which means that the body will be largely comprised of lightweight aluminum panels that will help to get the weight of the Raptor way down. Considering the fact that the 2015 F150 pickups that saw the biggest drop from the implementation of aluminum body panels in the larger bodied trucks – and the Raptor has traditionally been a based on the SuperCab and SuperCrew F150 pickups – the new Raptor should benefit greatly from the new aluminum body.

As was the case with the previous generation SVT Raptor F150, look for unique body appointments including a unique grille, a unique front fascia, unique front fenders and rear bedsides with flares for big, meaty off-road rated wheels and tires and a hefty dose of package specific badging that will likely include a big, flashy decal package.

Of course, the Raptor just wouldn’t be the Raptor without a serious suspension setup that will likely come from Fox (just like the previous models) along with a collection of items that will make it more capable during off-road stints, like underbody pans and stronger driveline components. The biggest question pertains to what will be under the hood, as the 6.2L SVT V8 from the previous Raptor is not slated for use in the next generation F150, so Ford will need to come up with a new engine for the Raptor...but what?

Which Engine for the Raptor?
The 2014 Ford SVT Raptor F150 was powered by a 6.2L V8 that produced 411 horsepower and 434lb-ft of torque. It was a great motor, but it appears as though it will not venture into the new generation of F Series pickups. There is a chance that Ford could surprise us all and bring back the 6.2L just for Raptor duty, but that seems unlikely. Instead, I expect that SVT will tune up either the 3.5L EcoBoost V6 or the 5.0L V8, both of which could make great high performance motors in a lightweight Raptor.

For the 2015 Ford F150 pickup, the 3.5L EcoBoost makes 365hp and 420lb-ft of torque while the 5.0L V8 makes 385hp and 387lb-ft of torque. Either of those engines in “normal” form would fall well short of the outgoing SVT 6.2L V8, but Ford already has higher performance applications for both of those motors. The 3.5L EcoBoost in the new Lincoln Navigator offers 380hp and a whopping 460lb-ft of torque, and while the dip in horsepower from the 6.2 is unfortunate, the huge jump in torque combined with the lightweight body of the new Raptor could make for one quick truck with the Navigator’s EcoBoost. Of course, the 5.0L V8 is also featured in the 2015 Ford Mustang with 435hp and 400lb-ft of torque, so while this V8 would offer more horsepower than the old 6.2L, it would offer slightly less torque.

Of course, SVT could very easily tweak either of those engines to make vastly more powerful and if I was a betting man, I would guess that the new Raptor F150 will feature a more powerful version of the 5.0L V8. I don’t think that it will offer the same specs as the Mustang GT, but I would expect a unique build that offers more torque than the Mustang, but slightly less horsepower. Most importantly, this worked 5.0 should be able to beat the old 6.2 in both horsepower and torque.

Unfortunately, that is all just speculation and the actual next gen Raptor F150 could go a totally different direction, but with just over two months until the 2015 NAIAS, all we can do is wait and hope for more information to leak out of Dearborn.

Biggie wrote on December 3, 2014 - 11:19pm Permalink
The F150 has better fuel economy than any full size gas truck, and its payload and towing capacity cant even be match by the Ram. And it will get even better fuel economy with the new 10 speed transmission that ford is developing for it.