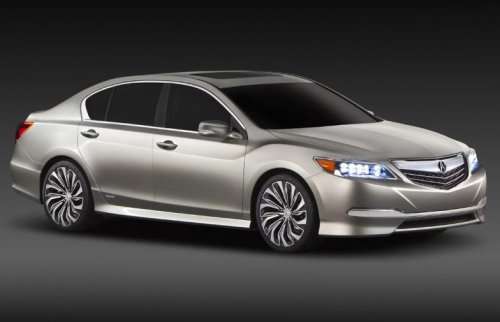 The Acura RLX Concept debuts at the NY Auto Show

Among the big debuts at the 2012 New York Auto Show was the Acura RLX Concept and while this new flagship luxury sedan from Honda might not have gotten the most attention from the media at the Big Apple show – American Honda expects the future production version of the Acura RLX to help Acura compete more with other full size luxury sedans in North America.
Advertisement

While the Acura RLX Concept shown in the images on the right is slated as being just a concept by American Honda; there is very little about the new RLX that couldn’t stroll right into Acura dealerships around North America. The exterior design isn’t as aggressively unique as previous Acura models (which is probably a good thing) but the bold grille and Acura logo return in a much cleaner form from the current models. The car has a very strong stance with sharp, angled wheel openings and a highline that runs the length of the car. The greenhouse of the RLX is long and slopes smoothly up from the hood and down to the trunklid – which is short like many modern full size luxury sedans.

Once the Acura RLX Concept turns to a production vehicle, we can expect to see a set of wheels and maybe headlights that are a little less ‘conceptish’. Also, we would be surprised to see the production RLX wear the same front and rear fascia as the Concept version displayed in New York but in all reality – there is really nothing about the front and back end that couldn’t fit nicely in a production luxury sedan.

Inside, the Acura RLX Concept features all of the amenities that you would expect from a premium luxury car including a state of the art infotainment and navigation system, multi-zone heat and air condition systems, power leather seats and a level of fit and finish that make this car deserving of the luxury sedan label.

The Acura RLX Concept that debuted this week in New York is powered by a new version of Honda’s 3.5L V6 which, thanks to the Sport Hybrid SH-AWD system, offers an impressive 370 horsepower. This system uses the traditional V6 engine to send 310 horsepower to the front wheels while a pair of electric motors located outback power the rear wheels – technically making it a “through the road” hybrid – with a total output of 370hp. This is a similar system to what was debuted on the new Acura NSX Concept that debuted earlier this year at the Detroit Auto Show. Official fuel economy figures will not be available until the US government performs their standardized testing procedures but Acura expects that the RLX in production form will offer at least 30 miles per gallon on the highway and around town. Those who don’t need the all-wheel drive, don’t want a hybrid or simply don’t want to deal with the added expense of the Sport Hybrid SH-AWD system can opt for a standard front-wheel-drive version that is powered only by the 310hp 3.5L V6.

In addition to the performance-friendly hybrid drivetrain, Acura engineers have fitted the RLX Concept with a new double-wishbone front suspension setup, a multilink rear suspension and Acura’s high tech Amplitude Reactive Dampers system – all of which should help to offer a smooth ride without compromising handling. There is also a sporty performance braking system with drilled rotors and large, multi-piston calipers but we will have to see if those braking components actually make it to production.

The Acura RLX is expected to arrive as a production model early in 2013 – possibly as a 2014 model year vehicle. Based on the look and performance of the RLX Concept, the production version should help Acura compete more in the large luxury sedan segment in the United States and Canada.

For a closer look at the new Acura RLX Concept, check out the video below and the images in the gallery, all of which are courtesy of Acura and American Honda.

Tesla Giga Berlin's New Hurdle: It's Not Only the Gov't, but Now Tesla Itself
Teslas Are Sold Out Until 2023, But The Timing May Reverse
END_OF_DOCUMENT_TOKEN_TO_BE_REPLACED