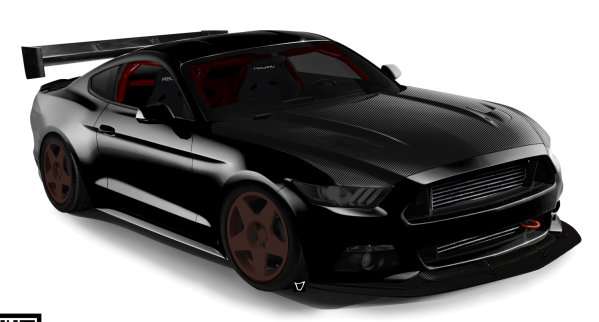 We are likely to see a great many new Ford Mustangs on display at the 2015 SEMA Show in Las Vegas, but one particular EcoBoost model will surely demand more attention than its counterparts – due to the 900 horsepower 4-cylinder mill tucked under the hood.
Advertisement

While the most powerful Ford Mustangs have always been powered by V8 engines, the new 4-cylinder EcoBoost is making quite a name for itself with an impressive mix of fuel economy and performance. With 310hp and 320lb-ft of torque, the new 4-cylinder Mustang is more powerful than the 2009 Mustang GT while being lighter and more nimble, but while the EcoBoost Mustang is an all-around better car than some past V8 models, there is still one major criticism of the 2.3L 4-cylinder mill – it just cant pack the big power of the V8.

Well, that is what some people believe, but one of the 2015 Ford Mustang EcoBoost coupes in Ford’s large indoor SEMA Show display will show that this tiny turbocharged engine can be built up to make monster power, just like the V8s.

The BisiBoost Ford Mustang
What is likely to be the nastiest EcoBoost Mustang at the 2015 SEMA Show was created by the folks at Bisimoto, a company who will roll out 14 new performance parts for the 2015-2016 Ford Mustang at the Vegas convention. The team wanted to build an awe inspiring 4-cylinder Mustang, so they started with a full build of the 2.3L EcoBoost engine. To handle the kind of boost created by the Turbonetics BTX7668 turbocharger, Bisimoto sleeved the cylinders and swapped in Arias forged billet pistons mated to Bisimoto steel connecting rods. They also added ARP head and bearing studs, high strength valve springs and retainers, a ported factory cylinder head, a Bisimoto “web level 2.4 camshaft”, a custom exhaust system, a custom engine control unit, a Sparco intercooler, an extensive fuel system upgrade and all of the other parts and pieces needed to make this monstrous EcoBoost engine run like a dream.

The result of this build? A new EcoBoost Ford Mustang that will churn out an unbelievable 900 horsepower – almost three times the stock power figures.

Handling the Power
Bisimoto didn’t want their 900hp Mustang to be unmanageable at high speeds, so they added a KW INOX V3 coil over suspension setup, a BuddyClub big brake package and a Progress Technology sway bar setup while Fifteen52 Tarmac wheels wrapped in Toyo tires help put the power to the pavement.

SEMA Show Quality, Inside and Out
If the Bisimoto Ford Mustang EcoBoost was at a drag strip, just having 900hp would be all that was needed to draw major attention, but at the SEMA Show, looking the part is almost more important than big power. To check this box, the Bisimoto Mustang has an AirDesign USA body kit with a custom vinyl wrap and on the inside, the BisiBoost has a Watson Racing roll cage, a Racepak data logging dash, Momo racing seats and race harnesses.

We will continue bringing you a close up look at the Ford Mustangs on display at this year’s SEMA Show as we get closer to the show, but in the meantime, bask in the glory of this stunning 900 horsepower, 4-cylinder Ford Mustang.