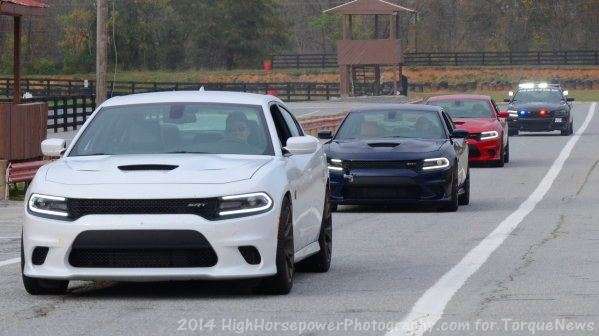 The Chrysler Group has announced the official EPA fuel economy ratings for the 2015 Dodge Charger SRT Hellcat and as expected, the Charger offers the exact same fuel economy figures as the Challenger with the same supercharged V8 and 8-speed automatic transmission – including a highway figure of 22 miles per gallon.
Advertisement

I should start by saying that not a single 2015 Dodge Charger SRT Hellcat will be sold based on fuel economy figures. Hellcat sales wouldn’t have gotten significantly better if the fuel economy figures had been even better and the sales wouldn’t have been any worse if it only hit 15mpg on the highway. People who are seriously considering buying a 707 horsepower full size sedan for $65,000 would almost surely put fuel economy at the very bottom of their automotive priorities.

However, improved fuel economy figures help reduce gas guzzler tax so technically, strong fuel economy numbers help to reduce the final price of the 2015 Dodge Charger Hellcat. Had the Hellcat Charger been far less efficient, it would have had a bigger additional cost for Gas Guzzler Tax so while most buyers really won’t care about the fuel economy – the levels reached technically saved them some money at the dealership.

Hellcat Charger Fuel Economy
The 2015 Dodge Charger SRT Hellcat with the supercharged 6.2L Hemi comes exclusively with the new heavy duty 8-speed automatic transmission. This drivetrain configuration is expected to hit 22 miles per gallon on the highway, 13 miles per gallon around town and a combined number of 16mpg. These numbers are not all that great in the grand scheme of things, but when you consider the fact that this Charger is the most powerful, the quickest and the fastest production sedan in the world – 22mpg on the highway is a solid number.

Really, in addition to helping to keep the gas guzzler costs lower, the 22 miles per gallon highway fuel economy number is just a nice bonus to an incredible performance car.

Charger SRT 392 Improves in MPGs and Power
While the SRT Hellcat package has gotten most of the attention (for very obvious reasons), the 2015 Charger is also offered in the returning SRT 392 package. This is similar to the 2014 Charger SRT 392 in its basic design, but the 2015 model features a new 8-speed automatic transmission as well as 15 more horsepower and 5 more lb-ft of torque.

Even with the added power, the 2015 Charger SRT 392 is slightly more efficient than the 2014 models, hitting 25mpg on the highway, 15mpg in the city and a combined number of 18 miles per gallon.

As is the case with the Hellcat Charger, no one is going to buy the SRT 392 because of the fuel economy figures – but these stronger numbers serve as a nice bonus for those who plan to drive their 485hp a great deal.