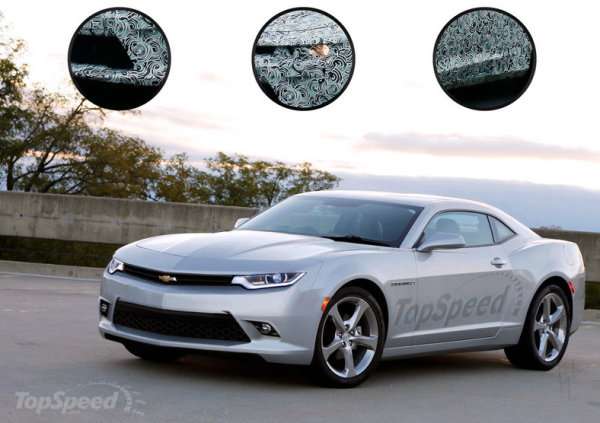 6th gen Camaro Teased Again in Chicago, but No Debut

The 2015 Chicago Auto Show opened to the media this morning and as was the case in Detroit, the next generation Chevrolet Camaro was only shown in a brief background video during a presentation for an unrelated vehicle – leaving us hoping that the 2016 Camaro will debut in New York in April.
Advertisement

Rumors indicated that the 2015 Chicago Auto Show could play host to the debut festivities for the next generation Chevrolet Camaro, but for the second major American auto show in a row, the new Camaro was a no-show in the Windy City. Some people were sure that it would debut in Detroit, but they were wrong and since then, others have suggested that Chicago would be the place to be for Camaro fans. Again, the people creating the rumors were wrong again and although the new GM muscle car was teased in both Detroit and Chicago, we really don’t have any solid information on the 6th generation Camaro.

6th Gen Camaro is Coming, Seriously.
We know that General Motors is working on the next generation Chevrolet Camaro. We have seen spy shots, we have seen videos of test cars on the road, we have seen artists renderings based on those images and videos, and we have even seen what looks to be the headlight of the 6th gen Camaro on eBay. However, we don’t know when this next generation Camaro will debut or when it will arrive.

We had hoped that the new Chevrolet Camaro would debut last month at the 2015 North American International Auto Show in Detroit, but the Chevy debuts focused on the new Volt and Bolt Concept. We did see what is believed to be a shadowy profile shot of 6th gen Camaro in a backdrop video during the Chevrolet press conference, but that was it.

At the 2015 Chicago Auto Show, what we believe to be the next Camaro was once again displayed in a shadowy image during the debut video for the redesigned Chevy Equinox, but there doesn’t appear to be a new Camaro debut slated for the Windy City.

What is Next?
When the next gen Camaro did not debut in Detroit, rumors kicked up that it would debut in Chicago, while other rumors pointed towards New York. New York has been a popular spot to debut new performance cars lately, so the 2015 New York International Auto Show in April seemed like the best bet, but all of the guys who know a guy who dated a girl who heard that the Camaro was coming to Chicago do have to be given some attention. After all, these people are right once in a while – but this wasn’t one of those times, as the rumors of both Detroit and Chicago debuts for the 6g Camaro have proven to be wrong.

This makes us question the validity of the rumors of a New York debut, but with each passing month, the likelihood of a Camaro debut gets a little better. If the 6th gen Camaro is going to be marketed as a 2016 model year vehicle, it would likely go on sale late this year, so production would likely begin in the early fall. We know that the 6th gen Camaro will be built in Lansing instead of Canada, so prior to the production of the new Camaro, there will likely be a major retooling effort at the Lansing facility. Those retooling moves would need to start this summer to be finished in time for fall production, so if GM doesn’t debut the new Camaro in New York in April, I’m forced to wonder if the 6th gen car will arrive in time for a normal 2016 model year.

If GM doesn’t debut the new Camaro in New York, there is no major American auto show until LA in November. If GM waits that long, there is a very good chance that the company will release the new Camaro for the 2017 model year. That seems unlikely, so my safe money is on the 2016 Camaro debuting in New York in April.

The image above is from TopSpeed, whose artists have used the spy photos and teasers to create what they believe is the 2016 Camaro.