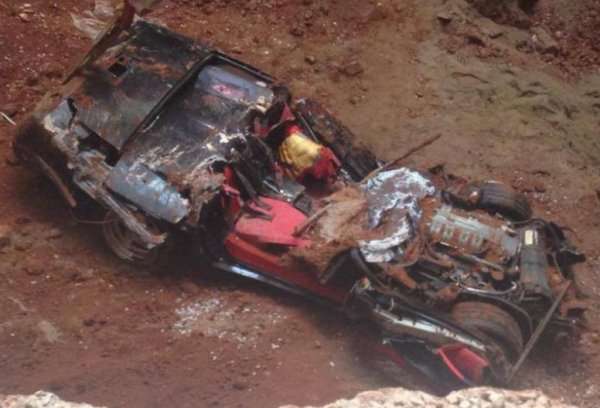 The team working on the National Corvette Museum sinkhole project was able to pull the 6th Corvette from the gaping hole under the floor of the Skydome this evening, but the condition of the 1993 Corvette ZR-1 Spyder prevented the celebration that accompanied the freedom of the other damaged sports cars.
Advertisement

Over the past few weeks, the construction team responsible for repairing the National Corvette Museum after removing the 8 fallen Corvettes has spent their time reinforcing the walls to make the next step of the procedure safe for the crew. Before doing that, the team carefully covered the rear end of the 1993 Corvette ZR-1 Spyder Concept that had been poking up through the dirt with a tarp and then some sand with the hopes of preventing any further damage to the car during the process of solidifying the walls of the sinkhole. Today, the crew was happy with the walls of the sinkhole so they were finally able to finish unburying the ZR-1 Spyder Concept, but as soon as the car was lifted away from the debris - it was clear that this Corvette is the most severely damaged thus far.

Before the 1993 Chevrolet Corvette ZR-1 Spyder Concept was pulled out of the sinkhole, the most severely damaged car from the National Corvette Museum collapse was the PPG Pace Car; which lost much of the area behind the seats. However, while the PPG car was beat up and torn apart, you could tell what it was. It is hard to say the same thing about the ‘93 ZR-1 Spyder Concept as when the car was lifted out of the hole - the vast majority of the car was gone.

As the 93 ZR-1 Spyder Concept landed nose down and upside down, it was hard to guess as to how bad the damage would be when it was flipped over. We could see the rear end of the car and that gave some people hope that it wouldn’t be all that bad. Turns out, it is actually the most badly brutalized Corvette from the museum sinkhole. As you can see in the cell phone video below, the car is basically stripped down to little more than a bare floor pan with the crushed remains of the interior and the engine - as you can see in the National Corvette Museum image shown above. It appears as though pretty much all of the body panels are gone including the doors and the front clip. We can see the top of the engine and the mangled remains of the red seats, but that it about all that remains outside of the wheels and the floor pan.

After lifting the 1993 Chevrolet Corvette ZR-1 Spyder Concept free of the debris packed around it in the sinkhole, the team set the car down “upright” on the floor of the hole with the plans to get it up and out of the hole tomorrow. However, the damage is so bad that when GM gets this car back, they will be building a new 1993 ZR-1 Spyder Concept more than fixing the current car. Once the 93 is up and out, the team will once again get back to removing the dirt and debris that is concealing the final two Corvettes swallowed up by the sinkhole. That includes the 1,500,000th Corvette and the Mallett Hammer Corvette. After seeing the PPG car and the ZR-1 Spyder Concept, Corvette fans should be prepared for the worst when the final two cars are unearthed.

As always, a special thanks to the folks at the National Corvette Museum for posting the picture above and the video below showing the extraction process.