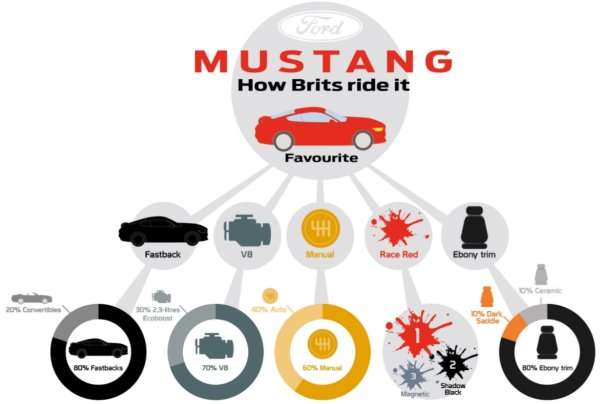 Ford UK has offered up some information on the popularity of the 2015 Ford Mustang in the local market, including the most popular options and the fact that the new Mustang is sold in in the UK until the middle of 2016.
Advertisement

It seems that many people in the American automotive media would like us to believe that European car buyers love diesels, wagons, convertible, small engines and manual transmissions, so when the 2015 Ford Mustang was introduced with the new EcoBoost 4-cylinder engine, it was expected that this small, turbocharged engine would be a hot commodity overseas along with the convertible models, but based on information from Ford UK, it seems that British Mustang buyers have very similar tastes to that of American buyers.

#6 – Sold Out Until July
The British market loves the 2015 Ford Mustang so much that the car is effectively sold out in the UK until at least July 2016. Ford UK has reportedly received more than 2,000 orders for the new Mustang, and filling those orders will take until at least the middle of next year.

#5 – Brits Like the Black Interior
In the UK market, 2015 Ford Mustang buyers can opt for an cabin finished in Dark Saddle (brown), Ceramic (Grey) or Ebony (Black). Not surprisingly, a whopping 80% of British 2015 Mustang buyers have picked the Ebony option, while 10% each chose the Dark Saddle or the Ceramic layouts.

#4 – Race Red Leads Exterior Colors
The 2015 Ford Mustang in the UK is available in the same exterior colors as the Mustangs sold in the USA, and preferences are similar in the UK to what we like here in the US. 23% of British buyers picked Race Red, making it the most popular color for the new Mustang in that market, while Magnetic Silver and Shadow Black were tied for second with 16% each. Deep Impact Blue is the next most popular with about 11% and Triple Yellow rounds out the top 5 with about 9%.

#3 – Brits Prefer Manuals, Barely
As an American, I am led to believe that the vast majority of cars sold in Europe are equipped with manual transmissions, but in the case of the 2015 Ford Mustang, the clutch pedal is only equipped in 55% of the cars sold. So, Brits prefer the manual, but only by a very small margin.

#2 – Fastbacks Rule
There are fewer convertibles offered in the USA than in Europe, and while we are led to believe that all Europeans want the open air driving experience – that does not seem to be the case with the 2015 Ford Mustang. Of the 2000+ new Mustang orders in the UK, 80% of those cars have had a fixed roof.

Maybe there are enough European convertibles available in the UK, leading to increased interested in the Mustang fastback…or perhaps the folks buying the new Mustang overseas like the classic fastback styling. In any case, the hardtop 2015 Mustang is far more popular than the convertible in the UK.

#1 – Big V8 Performance Preferred
Last, but certainly not least, 2015 Ford Mustang buyers in the UK have overwhelmingly preferred the 5.0L V8 engine. The new turbocharged 2.3L EcoBoost 4-cylinder was expected to be a huge hit overseas, where fuel prices are much higher than they are in the US, but among the first 2,000 2015 Mustang owners, 70% have ordered the V8 compared to just 30% for the 2.3L EcoBoost (the V6 isn’t offered overseas). Even though the 2015 Mustang GT sold in the UK loses about 25 horsepower due to the left side to right side conversion and even though the 5.0L V8 is hungry, thus being extremely costly to feed, Brits are still going for the big power.

So, while industry numbers will prove all of the clichés about British buyers, those folks buying the 2015 Ford Mustang in the UK have many of the same preferences as American buyers, including the big engine, the fixed roof and the bright red exterior.

Tony Park wrote on August 25, 2015 - 3:23pm Permalink
This is not a rhetorical question. I would like to know how the rightist-left side conversion causes a decrease in HP? Exhaust routing?
Richard Silvester wrote on November 25, 2015 - 2:56pm Permalink
Tony. I have a RHD Mustang GT on order and the letter that I have recently received from Ford UK says that there is a small power reduction due to changes required to the exhaust manifold on the right hand cylinder bank, to accommodate the steering column etc. However, the reduction is apparently around 5bhp, not the 25bhp stated in the article above. I think the significant difference between stated US and European model power outputs is as a consequence of how the engine's power output is calculated for each market, rather than an actual difference in output. However, someone more technically conversant that me could probably explain this better! Regards. Richard
Tony Park wrote on November 25, 2015 - 9:56pm Permalink
Thanks you for the response. That makes sense. Congratulations! I'm sure your car will turn a lot of heads! I've had the pleasure of driving through England and Scotland once. Oh how I would love to do that drive in your Mustang! I have a 2016 Shelby GT350 on order; built but not delivered. Impact Blue.