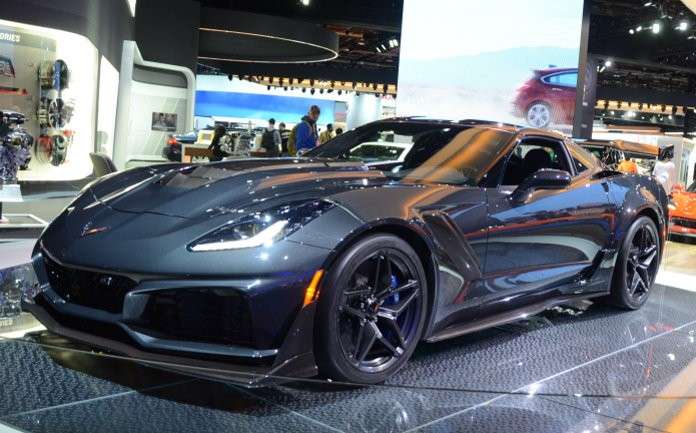 The right to own the first 2019 Chevrolet Corvette ZR1 was auctioned off at the Barrett-Jackson Scottsdale event and when the final gavel struck, the 755-horsepower C7 raised $925,000 for charity.
Advertisement

Since the C7 Corvette was introduced for the 2014 model year, Chevrolet has auctioned off the rights to own the first unit of each model for charity with help from the folks at Barrett-Jackson. NASCAR team owner Rick Hendrick has previously paid monster money for the first new Stingray and the first new Z06, and this past weekend, the well-known car collector bought the rights to own C7 ZR1 #1.

2019 Corvette ZR1 #1
As you probably know, the 2019 Corvette ZR1 is the best-performing car ever offered up by Chevrolet or General Motors for street use. The supercharged LT5 engine delivers a whopping 755 horsepower to make it the most powerful Chevy ever while the high tech suspension, the carbon ceramic brakes, the package-specific aero bits and the excellence of the C7 chassis all work together to (likely) make this the best-handling GM vehicle of all time.

Of course, that all comes with a big price tag, and the C7 Corvette ZR1 is also the most expensive Chevrolet ever, with a price starting right around $120,000. On top of that big base price are options and the fact that the ZR1 may be produced in limited numbers, so dealers are likely to slap an additional “market adjustment” on top of the price. This means that the first people to buy the newest supercharged Vette could be paying closer to $200,000.

However, when a car rolls onto the Barrett-Jackson auction block with proceeds going to charity, the MSRP doesn’t make any difference. All that matters is how badly someone wants the car and in the case of the rights to the first 2019 Corvette ZR1 – Rick Hendrick wanted it badly enough to pay $925,000.

With his successful bid, Hendrick now owns the first retail unit of each of the C7 Corvettes, along with owning the several first units of the Camaro.

Auction Proceeds
Like all of the other Chevrolet first unit auctions, the proceeds of the sale of the first 2019 Corvette ZR1 go entirely to charity. In this case, Stephen Siller Tunnel to Towers Foundation will receive the $925,000 in order to help build “smart homes” for wounded American soldiers as part of the Building for America’s Bravest program.

Stephen Siller was one of the first firefighters to respond to the September 11th attacks on New York’s World Trade Center towers. Sadly, Siller lost his life while saving others, but his family put together this charitable foundation to carry on his name while helping those soldiers who are the most severely wounded while protecting the freedoms that we all enjoy.

LG's New EV Battery Plant Is a Welcome News for Tesla
Tesla Giga Berlin's New Hurdle: It's Not Only the Gov't, but Now Tesla Itself
END_OF_DOCUMENT_TOKEN_TO_BE_REPLACED