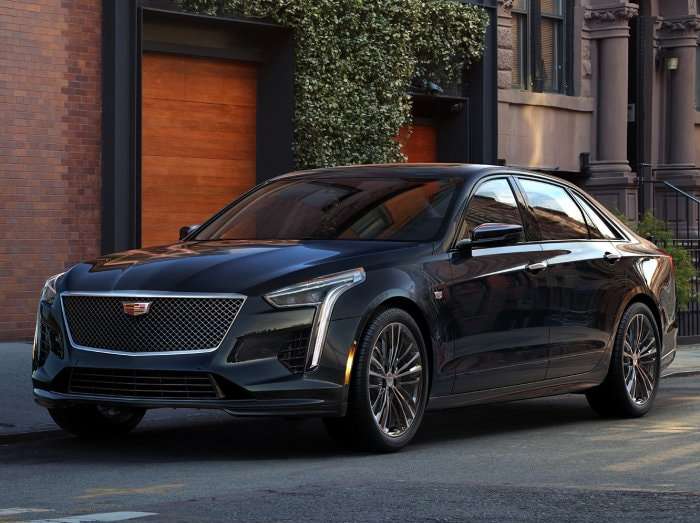 Cadillac announced this morning that the beautiful CT6 sedan will be offered in a new V-Sport trim for 2019, packing all-wheel-drive, a 10-speed automatic transmission and a new twin turbo V8 delivering somewhere in the area of 550 horsepower and 627 lb-ft of torque.
Advertisement

The Cadillac CT6 is a stunning luxury sedan, chock full of the most impressive interior features that General Motors has to offer, but since being introduced for the 2016 model year, it lacked a proper performance model. That will all change for the 2019 model year, as the CT6 will come in a new V-Sport trim level that combines big power from a new twin turbo V8 and the pinnacle of GM luxury.

The Twin Turbo V8
First and foremost, the biggest news with the arrival of the 2019 Cadillac CT6 V-Sport is the introduction of a new twin turbocharged V8. This new mill measures just 4.2 liters, but GM is “estimating” output of 550 horsepower and 627 lb-ft of torque. That is considerably more powerful than the twin turbo 3.0 liter V6 in the current CT6 (404 horsepower), but it still leaves some room between the new V8 and the current LT4 in the CTS-V (640 horsepower, 630 torque).

When coupled with the standard all-wheel-drive system and the 10-speed automatic transmission from the new Camaro ZL1, the CT6 V-Sport should be the quickest and fastest Caddy in the lineup – trailing only the supercharged CTS-V.

Other performance bits include Brembo brakes with 4-piston calipers up front, a uniquely tuned magnetic ride control suspension system, a uniquely tuned steering system, an active exhaust system, a limited slip rear differential and a strong rear bias for the AWD system – providing the dynamic feel that Cadillac owners will expect from the 550 horsepower luxury sedan.

More Interior Luxury
While the high performance drivetrain with a new twin turbo V8 is the most important aspect of the 2019 Cadillac CT6 V-Sport, it will also offer some new luxury features on the inside.

A new CUE interface with quicker function, improved voice recognition, a new rotary control system and 10-inch display will be standard in the CT6 V-Sport, but we can expect that it will be offered as an option in the other 2019 CT6 models. The V-Sport will not be offered with Super Cruise, but it will have the video display rear-view mirror and all of the safety features of the CT6 lineup.

The 2019 Cadillac CT6 V-Sport will make its grand debut later this month at the 2019 New York International Auto Show.

Toyota's First EV Will Have a Name of BZ: Toyota BZ
First Videos From Inside The Boring Company's Las Vegas Loop
END_OF_DOCUMENT_TOKEN_TO_BE_REPLACED