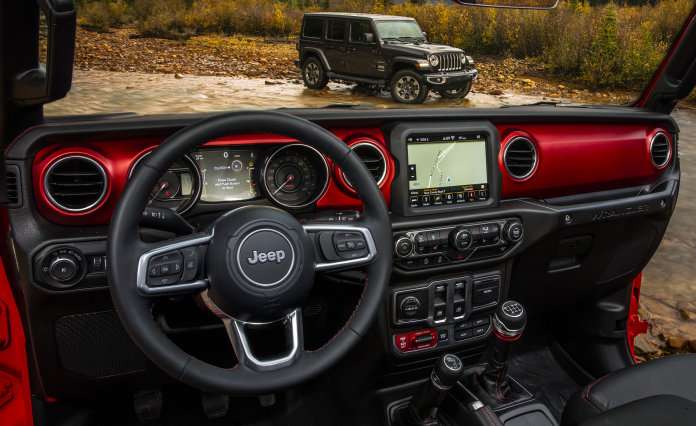 FCA has offered up the image above of the 2018 Jeep Wrangler interior, giving us our first chance to check out the cockpit of the redesigned sport utility vehicle ahead of the Los Angeles Auto Show debut later this month.
Advertisement

Last week, FCA introduced the redesigned 2018 Jeep Wrangler with a few simple images at the 2017 SEMA Show in Las Vegas. It was an unusual move to show off the vehicle in pictures ahead of the grand debut, but with the company’s Mopar division showcasing items for the all-new Wrangler at SEMA (and a collection of leaked images online), it made sense for the automaker to roll out a few official images of the newest version of the legendary SUV. There were no real details included with those initial 2018 Wrangler images, but those pictures were enough to pique the interest of Jeep lovers around the world.

Today, FCA has taken the pre-reveal of the 2018 Jeep Wrangler one step further, offering up a look at a bit of the redesigned interior, which is quite different from the current models.

The 2018 Jeep Wrangler Dashboard
FCA released two images this morning of the 2018 Jeep Wrangler interior, but they both focus on the dashboard, with the image above offering the best loo while a second shot shows the same interior from outside of the driver’s window – which is why we only included the one above. The only information on the new interior came in the form of the following quote:

That really doesn’t tell us much about the interior of the 2018 Jeep Wrangler, but in this case, a picture is worth a thousand words.

The 2018 Wrangler dash has a more linear design across the top, with four large HVAC vents running along the face of the dashboard and a redesigned gauge cluster with the customizable driver information screen in the middle of two large analog gauges. The newest UConnect infotainment system is mounted high on the dash (similarly to current models), but the area below the touchscreen appears to be heavily revamped. Where the central HVAC vents and the power window switches are located for the current models, the 2018 Wrangler has a far more high tech climate control panel with a few additional knobs for the sound system. There are also buttons for the Auto Start/Stop system, the Traction Control system, the heated front seats and the heated steering wheel.

Below that, where the current Wrangler has the HVAC controls, the 2018 Wrangler has a 12v power port, media ports, the power window controls. A quartet of auxiliary buttons and what appears to be switches for an electronic disconnecting sway bar and front-and-rear locking differentials.

Finally, we can see that the 2018 Jeep Wrangler will feature a manual transmission and a mechanical 4WD shifter, along with a passenger’s side grab handle and a sharp-looking body-colored dash face.

So right now, we don’t have any concrete details on the 2018 Jeep Wrangler, but we know what the exterior looks like and we know what the dashboard looks like. With a few weeks until the LA Auto Show debut, it won’t be long before we know everything that there is to know about the next generation Wrangler.