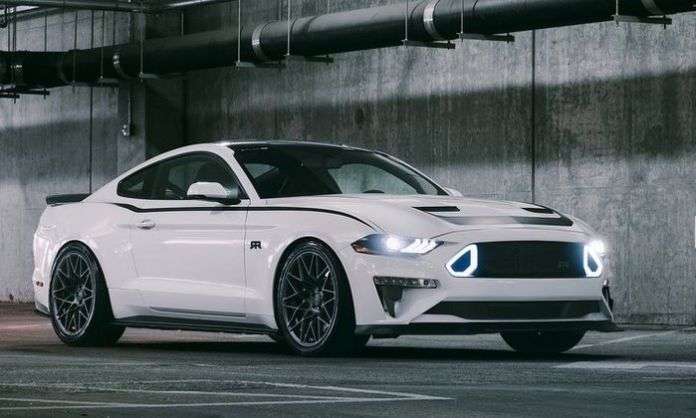 One of the most powerful customer-ready Ford Mustang showcars at this week’s SEMA Show in Las Vegas is the 2018 RTR Mustang, featuring the familiar name of Ford drift racing champion Vaughn Gittin Jr – and in its most powerful iteration, this muscle car could pack upwards of 700 horsepower.
Advertisement

Vaughn Gittin Jr is one of the biggest names in the world of drift racing while also being one of the biggest names in the history of American drifters – and he has achieved this incredible reputation behind the wheel of a Ford Mustang. Since Gittin began working with Ford Motor Company nearly a decade ago, he has piloted a great many race cars for the Motor Company, but he has also introduced his own line of customized Mustang packages.

Gittin’s brand name for these customized Ford Mustang models is RTR – Ready To Rock – and the 2018 Ford Mustang RTR should be the most powerful of the packages offered by this unique aftermarket company.

2018 Ford Mustang RTR Inside and Out

The 2018 Ford Mustang RTR begins on the outside, where Vaughn Gittin Jr’s crew adds a handful of custom features, all of which lead to a far more aggressive appearance. Up front, there is a new chin spoiler, a new hood and the most unique feature – the illuminated RTR grille. There is also a unique graphics package and a set of RTR 19-inch wheels wrapped in Nitto 555G2 tires.

This certainly isn’t the most outrageous exterior upgrade package on the market, but it leaves no question that this is not your average 2018 Ford Mustang GT.

We don’t have the specific details on the 2018 Ford Mustang RTR, but we know that there will be three stages of performance.

Ford Mustang RTR Spec 1 will likely include the exterior and interior upgrades, but with the stock output of 460hp and 420lb-ft of torque. This package could be purely aesthetic, or the company could add something like a suspension upgrade in order to improve performance a bit without adding more power (and cost).

Mustang RTR Spec 2 will almost surely include all of the interior and exterior upgrades, as well as some sort of handling upgrade package and perhaps low-yield performance items, such as a cold air intake and an exhaust package. The previous RTR Mustang Spec 2 offered a slight increase in power, so it seems possible that with some basic intake and exhaust upgrades, the 2018 Mustang RTR Spec 2 could deliver around 500 horsepower.

Finally, the 2018 Ford Mustang RTR Spec 3 will be the leader of the pack, with all of the interior, exterior and handling upgrades from the other models – but with a whole lot more power. The previous RTR Mustang offered 650 horsepower and the company has hinted that the 2018 version will offer even more power. With the Hellcat Challenger delivering 707 horsepower, it seems that most post-title performance packages are shooting for the 700 range, and I expect that the 2018 RTR Spec 3 Mustang will offer well into the 700hp range.

We should know more about the 2018 Ford Mustang RTR later this week, as it makes its formal debut at the 2017 SEMA Show in Las Vegas.