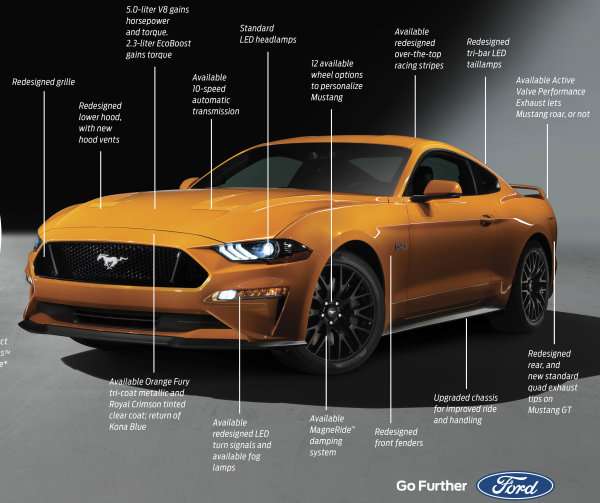 Yesterday we talked about the revised engine lineup of the 2018 Ford Mustang and today we take a step by step look at the exterior changes made as part of the mid-cycle refresh of America’s bestselling sporty car.
Advertisement

The biggest news pertaining to the 2018 Ford Mustang will eventually be the power increases for the 2.3L EcoBoost and 5.0L V8, but until those numbers are announced – the big news is the exterior refresh of the upcoming Mustang. Today, with the help of Ford’s press release and an infographic, we bring you a look at each of the exterior revisions which led to the new look of the 2018 Ford Mustang.

The Face of the 2018 Mustang
The most significant changes made to the 2018 Ford Mustang are found up front, as shown in the graphic above featuring the new Mustang GT in Orange Fury Tri-Coat Metallic.

Overall, the entire shape of the 2018 Ford Mustang front end is unique, with a hood with new, larger vents, which reaches further down towards the ground before meeting the front fascia – giving the car a much lower, more aerodynamic look. The headlights have a similar design on the inside, the but lenses have an entirely different shape and for 2018, full LED lighting elements (headlights, turn signals, fog lights, signature daytime running lights) are standard on all new Mustangs.

Ford also claims that the upper grille has been redesigned, but that aspect of the front end is one of the few which hasn’t changed vastly from 2017 to 2018. On the other hand, the lower fascia is completely different, with a larger grille opening in a much more angular layout. The hard angles of the lower grille opening extend to the turn signal/marker lights and fog light assembly, which is smaller and sleeker than the lower front lighting assembly on the current Mustang.

Finally, in addition to the revised headlights and the deeper-dipping hood, the front fenders have been revised to continue that lowered, widened look of the 2018 Mustang front end.

The Sides and Rear
Along the sides, the 2018 Ford Mustang hasn’t changed all that much, outside of the revised front fenders. The 2018 Mustang will come with 12 different wheel choices and in addition to the new Orange Fury exterior paint, Royal Crimson and Kona Blue join the color palate for the new model year.

Out back, the 2018 Ford Mustang has three key differences when placed side by side with the 2017 Mustang. First, the tri-bar taillights have been tweaked a bit for a more prominent look and while it is tough to tell from the pictures – it looks as though the rear taillight panel might have a slightly more upright angle. Second, the Mustang GT gets a new, low profile rear spoiler and third, the Mustang GT gets quad exhaust tips in a restyled lower rear diffuser.

The changes along the side and rear aren’t substantial, but the face of the 2018 Ford Mustang has changed far more than I would have expected. While some people online aren’t loving the new look, there is no question that this new front end has a more aggressive and more aerodynamic feel, while also looking a touch more modern.

Based on what I’ve seen so far, I like the look of the 2018 Ford Mustang and I suspect that once this car hits dealerships – we will see yet another spike in Mustang sales.