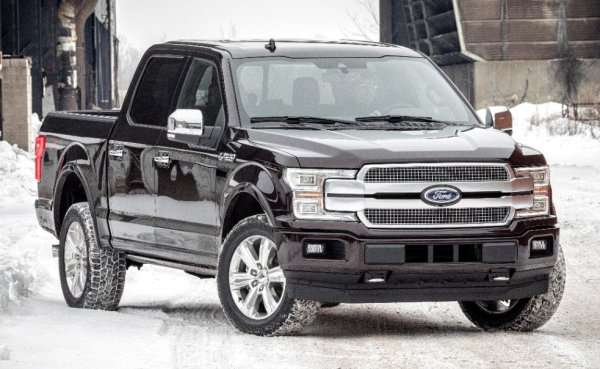 Ford Motor Company has used the 2017 Detroit Auto Show to introduce the facelifted 2018 Ford F150 pickup and while the new look is a nice change, the big news is that the 2018 F150 will feature a 3.0L PowerStroke diesel engine – confirming the popular rumors of a diesel-powered half ton Ford.
Advertisement

It has been speculated for at least a year now that the Ford F150 would eventually get a small diesel engine and more recently, spy shots showing test trucks driving around Metro Detroit led us to believe that the F150 would be getting a facelift in the immediate future.
Well, the future is now, as Ford Motor Company has announced that the 2018 Ford F150 will get a new front end, new taillights and a new diesel engine which just might make the F150 the most fuel-friendly half ton truck in America.

The New Face of the 2018 F150
First up, the biggest surprise with the 2018 Ford F150 is the refreshed face. The current F150 was introduced for the 2015 model year, so after only three model years, the Motor Company has given their bestselling half ton truck a pretty significant exterior refresh.

The key change is the grille design of the 2018 F150, which features a bold two-bar design which spans the grille opening and reaches into the headlight housings. The headlights themselves are new as well, with a similar basic design to that found on the current F150, but the new LED headlights are larger, giving the front end a much wider feel. It should also be noted that on at least one 2018 F150 trimline (presumably the base model), the grille is left open, without the bars, but the headlight design is similar.

Continuing that widening feel is a redesigned front bumper that looks a great deal like the current F150, but revised fog light bezels give the bumper a wider look. Overall, the changes to the front of the 2018 F150 go a long way in making it look bigger and more like the current Super Duty pickups – and that isn’t a bad thing.

Also, while the rear end changes aren’t as prominent, the 2018 F150 gets a new taillight design which, like the new headlights, are a bit bigger than the current look.

The F150 Diesel Cometh
Far more importantly, the 2018 Ford F150 will come with a new 3.0L PowerStroke diesel engine. There have been no details announced on this new F150 diesel engine beyond the name and the size, but we know that Ford builds a 3.0L diesel for Land Rover and that mill delivers 254 horsepower and 440lb-ft of torque. Figure that Ford likely isn’t going to offer a similar diesel with less power, so this new PowerStroke V6 for the F150 should offer at least 254hp and 440lb-ft of torque and with the Ram EcoDiesel offering 240 horsepower and 420lb-ft of torque – the output of the Ford 3.0L diesel in the Land Rover vehicles would be enough to overpower the half ton Ram diesel.

The bigger goal for Ford will be a diesel F150 that is more fuel efficient than the Ram 1500 EcoDiesel. Right now, the 2.7L EcoBoost makes the F150 the most fuel efficient gas-powered truck, but the EcoDiesel Ram is slightly more fuel-friendly with EPA numbers of 29mpg on the highway. With the help of the new 10-speed automatic transmission, the lightweight Ford F150 will likely be the first modern half ton truck to get a rating of 30mpg – at which point the F150 would be the most fuel efficient half ton truck in America.

The “bad news” here is that the diesel F150 isn’t expected to hit the market until the summer of 2018, so prospective buyers will have to wait for about 15 months – if not more.

As more information on the 2018 Ford F150 with the 3.0L PowerStroke diesel V6 becomes available, you will find it here on TorqueNews.com, but for now, the good news is that Ford is going to finally build the diesel F150 that so many truck fans have been demanding.

Elon Musk Says Tesla To Offer Car Insurance in Texas Next Month, But These Challenges Exist
Tesla Co-Found Plans To Build a Battery Factory and Shift The Industry
END_OF_DOCUMENT_TOKEN_TO_BE_REPLACED