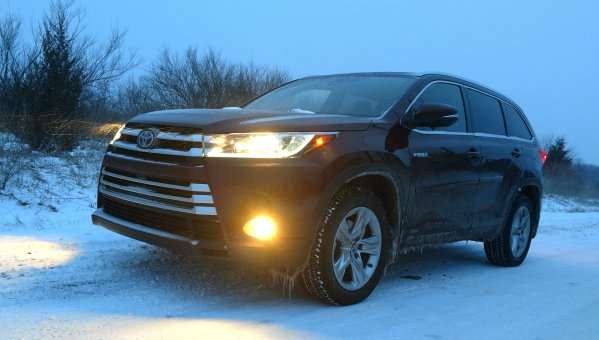 The 2017 Toyota Highlander Hybrid: A Hybrid that is Great in the Mud and Snow

If you are looking for a roomy, fuel-friendly hybrid that is great in serious snow, the 2017 Toyota Highlander Hybrid might just be your best choice for the money – combining V6 power, electric-only driving capabilities and the ability to drive in any road condition including mud and deep snow.
Advertisement

Now, I am sure that some owners of front wheel drive hybrid vehicles like anything in the Prius lineup are reading this, questioning why someone would want an all-wheel drive hybrid. After all, in opting for the larger vehicle with standard all-wheel drive, Highland buyers are compromising heavily on the fuel economy numbers which make modern hybrids so popular – so why get this hybrid rather than one that gets better MPG numbers?

It all comes down to the year-round functionality that the Toyota Highlander Hybrid offers that you just don’t get with the other, more fuel-friendly hybrids on sale today. The Highlander Hybrid offers the same capabilities to drive in rough winter weather or rough country roads, so while a Prius owner living in Miami or Los Angeles might not be able to appreciate the advantages of all-wheel drive, anyone who lives in the Snow Belt can under the need for something more than front-wheel drive.

Fortunately, while I was driving the 2017 Toyota Highlander Hybrid, the area was blanketed in deep snow, giving me a great chance to experience the advantage of an AWD hybrid.

Daily Driving the Highlander Hybrid
Before getting into how the all-wheel drive system of the 2017 Toyota Highlander Hybrid makes this vehicle better than your average 50-mpg hybrid, let’s look at how it performs in every day driving. The odds are good that Highlander Hybrid owners are going to spend far more time on dry, paved roads on warm days and in spending a week behind the wheel – the majority of my driving was on dry paved roads. The temperatures were cold, but much of my daily drive could be performed in almost any vehicle and in these conditions, the Highlander Hybrid performed just as well as the traditional Highlander.

As larger hybrid vehicles go, the Highlander is surprisingly quick from a stop and it feels far more willing to exceed highway speeds out on the open road. With so many hybrids being powered by tiny engines and drivetrains designed to optimize highway fuel economy, the compromise is that they aren’t particularly strong at highway speeds, but the V6 hybrid drivetrain in the Highlander doesn’t suffer from that issue.

In addition to packing V6 power which is rare in a hybrid, the 2017 Highlander Hybrid offers a smooth ride and a quiet interior while taking that ride. Really, if not for the badging and the fact that it can drive on an all-EV mode at lower speeds, the Highlander Hybrid is the same popular vehicle as the non-hybrid version. The difference is that during that cruising time, the hybrid model can get 30mpg on the highway with some delicate driving and with a heavier mix of city driving, you can very easily average better than 30mpg – making the hybrid about 7mpg better than the non-hybrid.

Speaking of EV mode, like other Toyota (and Lexus) hybrid vehicles, the Highlander has an all-electric mode at lower speeds, so in situations where you are driving at low speeds – such as driving around a neighborhood, the airport parking lot or even when stuck in slow-moving traffic, you can drive without using any gasoline. EV mode requires you to stay at speeds below 35mph and you have to be pretty gentle with the throttle input or the gasoline engine kicks in, but this mode is great for saving gas and improving mileage figures when you are driving at low speeds. I found it to be most useful when I was in Detroit’s miserable rush hour traffic, as I was able to coast along the highway for miles at 12mph without using any gasoline.

Although the added fuel economy figures of the Highlander Hybrid are a nice advantage, the EV mode is a bigger upside to the hybrid model, as those who spend a great deal of time stuck in traffic will see far greater benefits over the non-hybrid model.
The best thing that I can say about a hybrid is that it doesn’t drive like a hybrid, and unless you are in EV mode – the 2017 Toyota Highlander Hybrid doesn’t ever feel like a hybrid. However, the key advantage of the Highlander Hybrid isn’t that it is a hybrid – it is that this hybrid has all-wheel drive and a ride height which makes it far more capable in different weather situations and on different road surfaces than other hybrids on sale today.

Driving the Highlander Hybrid in Mud and Snow
I like about 45 minutes from Detroit, but my area is surprisingly rural, with more than our fair share of rough, unpaved roads. These roads give me a chance to test new vehicles on rougher roads than the average driver will face with any regularity, but never before have I taken any hybrid vehicles down these muddy, trench-lined roads simply because a car like the Prius isn’t made to handle off-roading situations. Most hybrids are front wheel drive and low to the ground for superior aerodynamics, which would force them to bottom out and/or get stuck on roads like this, so I won’t even take them down roads like this.

On the other hand, the combination of the taller ride height and the advanced all-wheel drive system of the Highlander Hybrid makes it unique from the majority of the electric-assisted vehicles on sale today. This allowed me to take these rough roads (cautiously at first) for my daily travels like I would with any other SUV and the Highlander performed beautifully. Mind you, this isn’t an SUV that you are going to take on a serious off-roading trip, but this SUV handled the rough roads very nicely, even in areas where the roads were deep with soft mud. Both the trenches and the slop were really no challenge for this hybrid, so when compared to any other electric or electric-assisted vehicle that I have tested in the past five years – the Highlander Hybrid is, without a doubt, the most capable in terms of rough, unpaved roads with deep muddy stretches.

Also, after spending a few days in cold temps on dry roads, Michigan’s odd weather patterns flared up one last time for the winter of 2016-2017, dumping nearly a foot of snow on my area over the course of 24 hours. The paved roads, even after being plowed, were a mess and very few people were out and about during the latter portion of the storm. The unpaved roads were even worse, since the plow trucks cant dig down as far, making these roads even less useful for anyone without all-wheel drive or four wheel drive.

Unfortunately, I found myself about an hour from home during the late stages of the storm, so I was driving in some fairly treacherous conditions. The roads were bad enough that there were very few cars out and many of the non-AWD/4WD vehicles which I saw out and about were stuck or crashed along the side of the road. At one point, the road leading me home was closed due to an overturned dump truck, forcing me to take the muddy side roads to get home. As soon as we turned away from the paved, plowed roads, we faced a tough climb up a short, steep hill. I was the fourth vehicle in line as we turned away from the wrecked truck, with a half-ton truck and two compact sedans in front of me. The truck had no issue, but it was clearly in four wheel drive, as it was flinging snow high in the air as all of the tires dug hard into the deep snow. The next two cars, both of which were front wheel drive, took their turn trying to get up this hill and both failed. One car (which is also offered as a hybrid) got about halfway up and slid sideways, leaving the driver to turn the car around to drive down the hill once and the other car didn’t even get that far – also turning around in front of me. I approached the hill at low speed, making sure to keep my forward momentum as the Highlander Hybrid dug in and worked its way up the hill without really breaking a sweat.

The Highlander Hybrid climbed that first hill so easily that when I got to the next hard climb on the snowy road, I began working to see if I could get it stuck. At one point, I stopped at the base of the hill, but without any momentum, it climbed right up the hill and when I got to the next incline, I stopped in the middle of the hill – almost expecting that I would have to back down and get a second run (there were no other vehicles around me while performing these tests). However, while the Highlander Hybrid spun the tires a ton while digging its way up the hill when starting in the middle – it still made it to the top of the hill.

While I haven’t tested any of the popular hybrid small cars in the snow, I have tested their non-electric counterparts in the snow. Based on the performance of these front wheel drive vehicles in the snow and the difficulties of the two small sedans which couldn’t climb the snowy hill in front of me, I can safely say that the popular FWD hybrid cars would not have been able to get me home that night. On the other hand, the Highlander Hybrid did so well with the snow-covered dirt roads that I spent some time just driving around the empty roads that night, conquering the rough roads with the most capable modern hybrid vehicle I’ve tested.

The Final Word
The 2017 Toyota Highlander Hybrid is not the most fuel efficient hybrid on sale today and if your key focus is MPGs, you will probably want to look at the Prius – not the Highlander. However, the Highlander Hybrid is the most powerful and the most capable vehicle sold in America with an all-electric driving while also offering great fuel economy figures for a vehicle of this size, with V6 power and all-wheel drive.

In short, while the Highlander Hybrid isn’t the most fuel-friendly vehicle on the market today, I believe that it is the most capable hybrid with an electric driving mode on sale today. If you need a vehicle that will perform well on muddy roads and in deep snow along with also offering all-electric driving and great daily-driving dynamics – the Highlander Hybrid is the best vehicle to fit your needs.